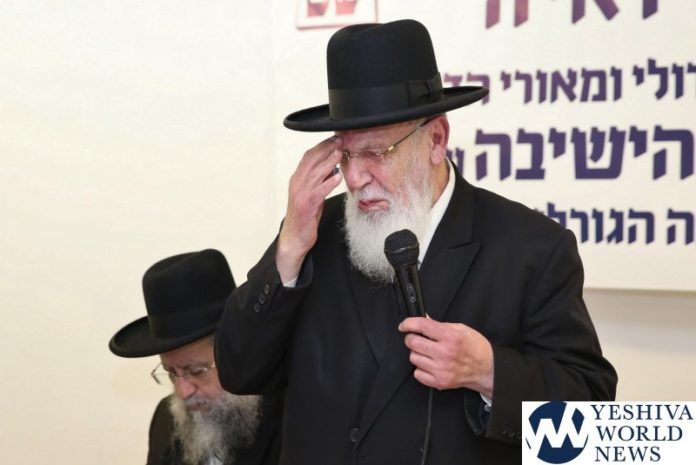 HaGaon HaRav Shalom Cohen, head of the Shas Moetzas Chachmei HaTorah, spoke out harshly on Motzei Shabbos against Chareidim who voted for Beit Shemesh Mayor-elect, Dr. Aliza Bloch, who is a member of the dati leumi community. She stunned many by unseating two term mayor, Rabbi Moshe Abutbul of the Shas party by 533 votes.

During a Shas post-election celebration event in Jerusalem, Rav Cohen decided to address the loss in the Beit Shemesh, citing it was nothing less than “an embarrassment and disgrace” that Bloch emerged the victor against Abutbul.

Rav Cohen addressed claims of disapproval against Abutbul from within the Chareidi camp: “They say that Moshe Abutbul did not take care of garbage collection and cleaning the streets. Phoeey (slang) on you! [טפו עליכם!]”

“What about the Torah related things that he did? Is there more cleanliness in the world than that? In Olam Habaah, they [Chareidi voters for Bloch] will be put into clean bathrooms. There, they will have clean bathrooms…”

“How do Yerei Shomayim who put on Tefillin in the morning not know how to weigh between this one (candidate) or this one? It is an embarrassment and a disgrace”, added Rav Cohen.

Shas chairman Minister Aryeh Deri also blamed the Yachad party headed by Eli Yishai for Abutbul’s failure. Deri said “They are all looking for the responsible party. Who is to blame. They look when the answer is right under their noses. The other list – the same list the grandson of Maran is on (Yishai’s), which took 1,300 votes [from us]”.

(He was referring to a grandson of HaGaon HaRav Ovadia Yosef ZT”L running with Aryeh King in the Jerusalem race, and that list is connected to Yishai’s party).

Deri added that contrary to the word of Gedolei Torah, Sephardim, Ashkenazim and chassidim stood behind another candidate, “Against one of our own, HaRav Moshe Abutbul, and there is not an Admor or Gadol B’Torah who did not back him and behold, the entire chareidi tzibur is now sorrowed and pained”.

“These people”, he added, referring to Yishai, “purportedly act in the name of Maran, in the name of Torah, against Chachmei Yisrael. Like I said, Baruch Hashem, they went from הלכו מדחי אל דחי, [a bad situation to worse]”.

Yishai did not remain silent, but responded via twitter, stating, “Deri failed in the Beit Shemesh race but instead of behaving like the rest of the chareidim who promised to draw conclusions and conduct a thorough examination of why thousands of chareidim preferred to vote Bloch, he regularly places the blame on others and runs away from taking responsibility. This was the case in Emanuel too, as well as in Elad and many other municipalities around the country”.

“I am not in Shas for over four years and I am still responsible for all of Deri’s failures. It is okay however. We are used to it, that he blames others [after all] we also killed Rabin”.