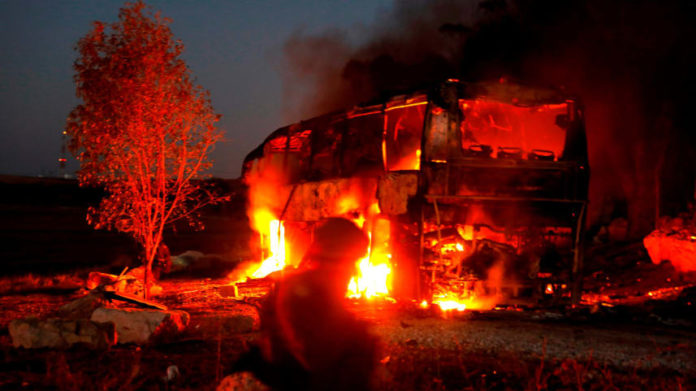 The Yad Hashem was openly seen repeatedly in Southern Israel on Monday, as more than 300 rockets rained down on Israeli cities, killing one civilian. In an incredible miracle, Hamas fired a rocket at a bus that had been carrying Chareidi soldiers to the Gaza border, but all escaped unharmed.

Large groups of soldiers arrived in Israel’s south on Monday as part of the increase of military personnel in the area following a tense weekend on the Gaza border. This particular group of soldiers arrived prior to the beginning of the barrage of rockets from the Gaza Strip that erupted just after 4:30PM local time.

According to Bechadrei Charedim, the bus that brought the soldiers down to the area, dropped off groups of soldiers in different locations as was pre-planned by the IDF. The last stop was near Kibbutz Kfar Azza, a few kilometers from the Gaza border and opposite a town in Gaza known as Jabaliya, located in the northern Gaza Strip.

The last soldiers to leave the bus gathered their gear and headed to the appointed meetup spot in at the IDF Black Arrow monument in a nearby thicket of woods, leaving just the driver on board.

Moments later, the bus, which had no markings identifying it as military, pulled out into the open and was immediately struck by a Kornet anti-tank missile. The direct hit on the bus caused it to erupt in flames.

Footage of the shocking incident was captured by Hamas, who published it online:

One soldier, aged 19, who was apparently standing near the outside of the bus, was severely injured in the resulting explosion.

The soldier transported to the trauma center in Soroka hospital for treatment and surgery.

The driver, 25, was also treated for shock.

The bus had been filled with soldiers who are residents of Jerusalem, Bnei Brak, Ashdod, Netivot, Beer Sheva, Afula and other cities.

Earlier this evening, an IDF soldier was severely injured when an anti-tank missile fired from #Gaza hit this bus.
We have notified the family and hope for a speedy recovery. pic.twitter.com/ZH2axwADKY