It was the largest single-day total of fired rockets EVER, and one of the most serious rounds of fighting since the devastating 2014 Gaza war.

In Gaza, the sky was lit up with outgoing rocket fire. The Iron Dome missile defense system activated dozens of times, intercepting approximately 70 rockets, and most of the others fell in open spaces. But rockets landed in the southern Israeli town of Sderot, setting off a large fire near a shopping center. Another rocket landed near a factory, and several homes were hit in southern towns.

In Ashkelon, a man in his 40s was killed as a rocket struck his apartment building shortly after midnight. Reports are he was a Palestinian living in Israel illegally.

A woman, also in her 40s and identified as his wife, was found critically wounded in the same apartment.

According to Haaretz, the two were spotted by a photographer who had come to take pictures of the damage, about an hour after police and rescuers had left the building.

The photographer said the two were under a wall that had collapsed. Police said that all the apartments in the building were checked four to five times, but that particular unit had sustained the most damage “and everything was destroyed.”

The rocket appeared to hit the upper floors of the four-story apartment building, leaving a gaping hole in its side. 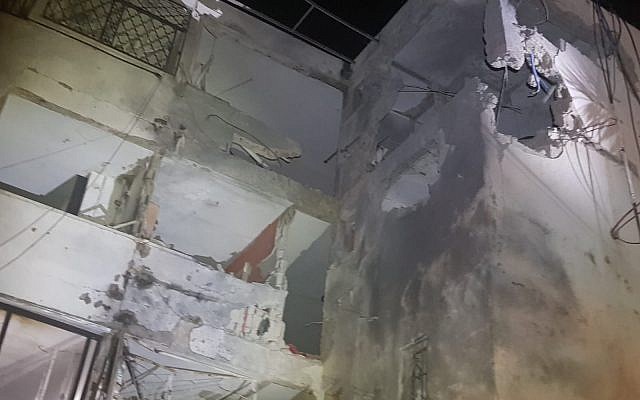 A 40-year-old man was also moderately wounded by shrapnel; two women in their 20s were lightly injured by glass shards; and two men in their 40s and a woman in her 90s were treated for smoke inhalation after a fire broke out at the scene, according to the Magen David Adom ambulance service.

The moment of impact was captured by a nearby resident – see video below.

DRAMATIC FOOTAGE: The moment a rocket from #Gaza landed in middle of a residential neighborhood in #Ashkelon. At least 7 people were injured

A bus traveling near the border was struck by an anti-tank missile, critically wounding a 19-year-old soldier. The strike set the bus on fire, sending a large plume of black smoke over the area. Others were injured in the attack, though not as seriously.

Earlier this evening, an IDF soldier was severely injured when an anti-tank missile fired from #Gaza hit this bus.
We have notified the family and hope for a speedy recovery. pic.twitter.com/ZH2axwADKY

The IDF launched a heavy retaliatory strike, with warplanes, helicopters and tanks striking over 70 terror targets, including Hamas’ intelligence headquarters, 3 terror tunnels, observation posts and weapons facilities. They blew up the building that housed the Hamas-affiliated television network, Al Aqsa TV. They also targeted a squad that was launching rockets.

At least four terrorists were killed and another nine were wounded.

We struck Hamas’ military intelligence HQ in response to the 300+ rockets that terrorists in #Gaza fired at #Israel.
This is where Hamas’ intelligence operatives gathered information to launch attacks on Israelis.
Hamas intentionally established their HQ next to a school. pic.twitter.com/nuHoLmlcD9

“We continue to strike and retaliate against the military targets belonging to terrorist organizations in Gaza, and as for our intentions we will enhance these efforts as needed,” he told reporters.

1:00AM IL: Hamas spokesman Abu Obeidah issued a message threatening that the terror group will expand rocket fire beyond the Gaza border region if fighting persists.

“The resistance’s message..What happened in Ashkelon…is a warning that what is coming will be greater if the aggression continues. Strikes you all did not know before,” he says on Twitter.

“Approximately one million Zionists will be within the range of our missiles if the enemy’s decision is to continue its aggression”, he wrote earlier.

11:45PM IL: Palestinian Authority President Mahmoud Abbas is in contact with regional and international officials to “stop Israeli aggression in the Gaza Strip,” his office says.

11:05PM IL: A rocket has landed in middle of a residential neighborhood in Ashkelon.

A spokesman for the Barzilai Medical Center in Ashkelon says doctors at the hospital are treating 20 Israelis in relation to the missile strike.

A 60-year-old woman was found unresponsive in her apartment, suffering from injuries throughout her body caused by shrapnel from the rocket. Several others were treated for wounds from shrapnel. Three victims were treated for smoke inhalation after a fire broke out at the scene. Thirteen were treated for from post traumatic stress.

Israeli police are seen in the attached photos working to defuse a number of missiles that landed in the city.

10:45PM IL: Israel’s liaison to the Palestinians says Hamas has crossed a “red line” in its indiscriminate rocket fire at Israeli towns.

“The State of Israel will dial up its response against [Hamas],” writes COGAT head Kamil Abu Rukun.

He then addresses residents of Gaza directly. “Look carefully at the pictures from Operation Protective Edge in 2014 – a picture is worth a thousand words,” he says, appearing to warn that a similar Israeli response to what was seen in 2014 is forthcoming.

10:00PM IL: The United Nations says it is working with Egypt to broker an end to the latest round of fighting.

The office of the U.N.’s Mideast envoy, Nickolay Mladenov, said Monday that efforts were underway “to ensure that Gaza steps back from the brink.” It called for an end to rocket fire, and for restraint “by all.”

“Rockets must STOP, restraint must be shown by all!” Mladenov tweeted.

The station went off the air after the airstrike. Minutes earlier, it had halted its programming and was broadcasting a still image of its logo after the building was hit by a warning missile. Shortly after, three loud explosions were heard and the screen turned black.

Witnesses say the blast destroyed the entire building, and explosions illuminated the night sky. Workers evacuated the building after the warning shots. It was not clear whether there were any casualties.

WATCH: The Hamas propaganda department has directed attacks, instructed how to do them, and broadcasted incitement and violence for years. Tonight, the IDF made sure that this station won’t broadcast again. pic.twitter.com/m3l9FGeOn8

EARLIER REPORTS – EDITED WITH NEW DETAILS THROUGHOUT THE DAY:

At least 10 people have been treated by United Hatzalah volunteers in Sderot and the Sha’ar Hanegev region due to injuries relating to the rocket fire from Gaza.

Head of United Hatzalah in Sderot, EMT Nehorai Darshan said: “United Hatzalah volunteers have already treated ten people who suffered light injuries due to being hit by shrapnel from the rockets landing in and around Sderot and the Sha’ar Hanegev region. One young girl was also treated by our volunteers after her finger was partially cut off by a door in a secure room when it was slammed shut. Our volunteers are running from emergency to emergency due to the high volume of calls from people suffering injuries or emotional shock as a result of the rocket fire and the resulting air raid sirens.”

The attack from Gaza came less than a day after an IDF special operations officer was killed in an operation gone bad, that also killed a senior Hamas commander and six additional Palestinian gunmen in the Strip.

Islamic Jihad spokesman Daoud Shehab said the groups decided to retaliate for the deadly Israeli incursion “so the occupation and its supporters know that the lives of our sons come with a price.”

Overnight, during operational activity in Gaza, an exchange of fire broke out, killing IDF officer, Lt. Col. M. May his memory be a blessing. pic.twitter.com/Gq8a25Ppeh

The empty vehicle apparently used by the Israeli force was reduced to a charred chassis after aircraft fired several missiles at it, leaving a gaping crater in the ground.

ELIMINATED – An elite team of #IDF special forces carried out an undercover assassination attempt on #Hamas commander Nour Baraka deep in #Gaza. Sadly, the soldier’s cover was blown and an #Israeli soldier was killed in a shootout

The Israeli military said there had been an exchange of fire during an operation in Gaza, with troops withdrawing from the territory with the help of aircraft. The military provided few details about the reason for the raid. The Israeli military chief, Lt. Gen. Gadi Eisenkot, said a “special force” carried out “a very meaningful operation to Israel’s security,” without elaborating.

Israeli military spokesman Lt. Col. Jonathan Conricus said the operation was “not intended to kill or abduct terrorists but to strengthen Israeli security.” He said the force faced a “very complex battle” and was able to “ex-filtrate in its entirety.”

The special operation yesterday was not intended to kill or abduct terrorists, but to strengthen Israeli security. The force waged a heroic and very complex battle and was able to exfiltrate in its entirety. We salute the bravery of Lt. Col. M. and his peers.

Michael Oren, an Israeli Cabinet minister, said Israel “will do whatever it takes” to defend itself. “We expect the world to stand with us,” he said.

The EU’s ambassador to Israel, Emanuele Giaufret, called for a halt in “indiscriminate” rocket fire toward civilians. “Everyone must step back from the brink,” he said.

The cross-border fighting came just days after Israel and Hamas reached indirect understandings, backed by Qatar and Egypt, to allow cash and fuel into Gaza. The understandings are meant to be part of a broader effort to alleviate deteriorating conditions in the impoverished territory after 11 years of an Israeli-Egyptian blockade.

Netanyahu returned to Israel on Monday morning, cutting short a trip to Paris where he was set to meet French President Emmanuel Macron after having participated in ceremonies marking 100 years since the end of World War I.

In a tweet after his arrival back home, Netanyahu praised the slain officer, whose identity was being kept confidential for security reasons, and said “our forces acted courageously.” The officer’s funeral was being held Monday.

LOOK: This is one of the multiple Israeli homes hit by rockets fired from #Gaza. Yes, HOMES. Plural. Terrorists in Gaza are targeting Israeli civilians. We are targeting the terrorists. pic.twitter.com/hrApfCZQfm

🚨200 rockets have been fired at #Israel from #Gaza this evening. Sirens are still sounding as we tweet this. pic.twitter.com/2wkJV2Gis8

More than one rocket per minute has been fired from Gaza at Israel over the course of two hours. Let that sink in. pic.twitter.com/UEJyKQaQar

VIDEOS – TERROR: Several rockets from #Gaza struck homes, a shopping center and a bus in Southern #Israel. At least 13 #Israelis were injured, one seriously

OVER THE LAST HOUR: 80+ rockets fired from #Gaza at innocent Israelis. The Iron Dome intercepted several of them. We are currently striking terror targets in the Gaza Strip. pic.twitter.com/a27pPb6oJe

RAW FOOTAGE: The skies of southern Israel RIGHT NOW. Dozens of rockets are being fired from #Gaza at Israeli civilians. pic.twitter.com/Iu6QwzUo8l