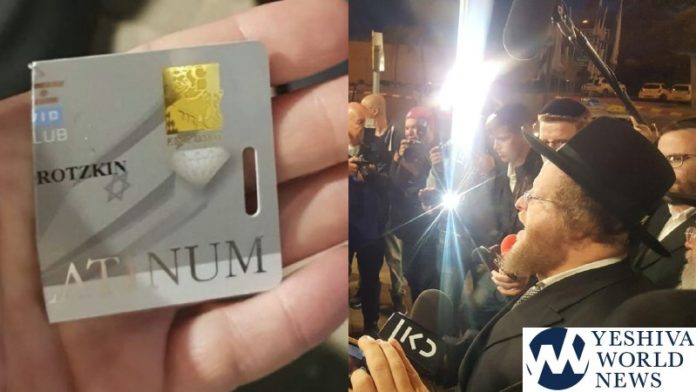 One of the passengers on last week’s El Al ‘Shabbos in Athens’ flight was Rav Sholom Ber Sorotzkin, the Rosh Yeshiva of the massive Ateres Shlomo network of Yeshivos and Kolellim.

Rav Sorotzkin released a letter on Friday addressed to the CEO of El Al, threatening a boycott on Israel’s national airline if a full apology for having scapegoated the fiasco on “violence” by Chareidi passengers was not issued by Sunday evening.

El Al refused to apologize, so Rav Sorotzkin carried out his promise to boycott.

In front of multiple TV cameras and reporters, Rav Sorotzkin stood in Ben Gurion Airport, and cut his “Masmid Program” frequent flyer card. He told the media that he already has a list of 180 people – most of the Roshei Yeshiva and heads of Mosdos – who will no longer fly El Al due to their refusal to apologize.

He gave a brief statement to the media, followed by singing and dancing to “Yismichu B’malchuscha Shomrei Shabbos”.

In should be noted, that Rav Sorotzkin has been flying El Al to the US and other countries on the average of once every other week (at the very minimum) for the past 13 years. He sometimes flies once a week due to his need to fundraise to the tune of millions of dollars to fund his massive network of Yeshivos and Kollelim.