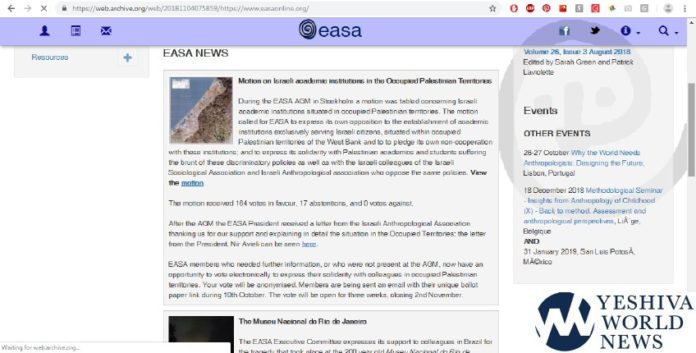 The European Association of Social Anthropologists (EASA) ratified a motion this month to boycott Israeli academic institutions in Yehuda and Shomron.

The motion was first tabled in August at the EASA’s annual general meeting in Stockholm and was ratified this month by an overwhelming majority of the organization’s members.

According to the EASA’s website, the motion passed by a vote of 830 in favor, 21 opposed and 37 abstentions.

Prior to the vote, the head of the Israeli Anthropological Association (IAA) and Ben-Gurion University professor, Nir Avieli, penned a letter written on IAA stationery to the EASA president urging its members to vote in favor of the motion.

“Those of you who were not present at the assembly now have the opportunity to ratify and amplify that expression of solidarity,” wrote Avieli in the letter that was forwarded to the EASA’s members. “I urge you to do so and thank you for your attention and solicitude.”

In the letter, Avieli asserted that Israeli institutions “are not open to the Palestinian residents of the Occupied Territories, but only to Israeli citizens.”

Despite this claim, both Ariel University and Israel’s Council of Higher Education have stated that residents of the Palestinian Authority are able to study at institutions beyond the Green Line.

Matan Peleg, CEO of the Zionist organization Im Tirtzu that has been a leading critic of politicization in academia, called the IAA’s support of this boycott a “disgrace.”

“It is an absolute disgrace that Israeli academics – whose salary is paid for by the Israeli taxpayer – are leading the calls to boycott academic institutions in Israel,” said Peleg.

“While tremendous amounts of resources are invested in Israel and throughout the world to combat the international BDS movement, these radical professors are undermining these efforts by promoting BDS from within Israel.”

“Only this week we were reminded of the harmful effects that ‘BDS from within’ has on Israel,” added Peleg referring to the recent Airbnb boycott of Israeli homes in Yehuda and Shomron.

Attached is a screenshot of the EASA’s website last week, indicating that the vote occurred from October 10 – November 2.