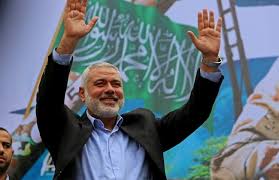 The top leader of the Hamas terror group says he has received an invitation to make an official visit to Moscow.

The office of Ismail Haniyeh said the invitation was delivered Wednesday by a visiting Russian diplomat. Its statement did not elaborate on the purpose of the visit.

Russia maintains high-level contact with Hamas, which Israel, the U.S. and the European Union classify as a terrorist group.

In 2007, a year after winning parliamentary elections, Hamas drove out the Western-backed Palestinian Authority from Gaza and took over the coastal enclave.