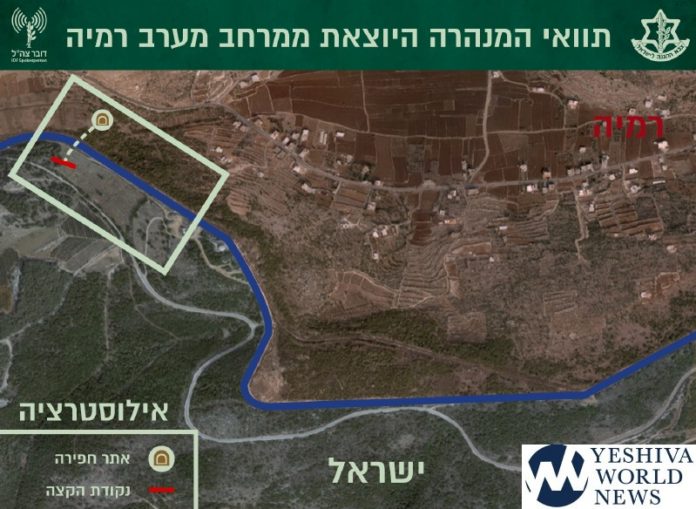 The tunnel was dug from the Shiite village of Ramyeh and was several feet into Israeli territory. Like the other tunnels, it was not yet operational.

Operation Protective Shield began on 26 Kislev, and it is a military operation to detect and destroy Hezbollah terrorist tunnels connecting from Southern Lebanon into Northern Israel.

As part of the work of the Joint Staff of the Northern Command and the Intelligence Branch, areas close to the Blue Line that could be used by Hezbollah to carry out its attack plan were examined.

The official IDF statement adds: “As part of the systematic monitoring of a forested area near the Shiite village of Ramiya and the area of Israel, a number of exceptional incidents were identified, which exposed the area as a space from which Hezbollah might attempt to implement its plans. The concentration of efforts that has spanned over the past few years in a variety of visual and technological means has led to the discovery of the route’s space in our territory.”

Earlier in the week, UNIFIL confirmed that cross-border tunnels were discovered as reported, citing this is a serious violation of UN Resolution 1701, the Second Lebanon War ceasefire agreement, as the tunnel crosses the official Blue Line, the internationally recognized border between Lebanon and Israel.

Ahead of a United Nations Security Council meeting on the Hezbollah terror tunnels, Prime Minister Netanyahu urged the international community to take decisive action against the Shiite terrorist group.

“A few weeks ago, Israel launched a campaign to expose and neutralize a network of cross-border terror tunnels on our northern border with Lebanon.

Since the beginning of this campaign, December 4th, we’ve uncovered, so far, four tunnels that cut into our territory. Their goal has been to penetrate our territory, to kidnap our people, including civilians, murder civilians and conquer the northern piece of the Galilee.

This is not merely an act of aggression; it’s an act of war. It is part of a war plan I would say. It has been confirmed by UNIFIL. UNIFIL has confirmed the existence of these tunnels and they have said that they represent a clear violation of UN Security Council Resolution 1701. 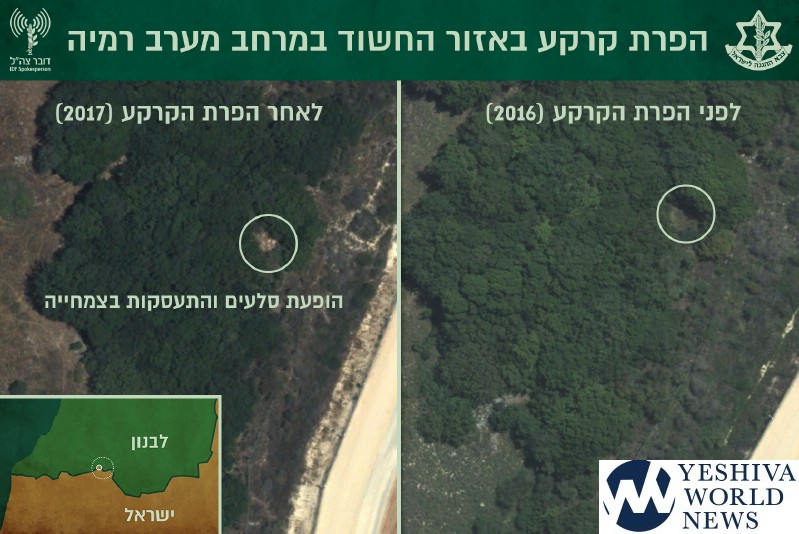 Hezbollah is doing all this because Iran supports it in every way, including with money, money that it got from the flawed Iranian deal. And this is part of the Iranian web of aggression.

The people of Lebanon have to understand that Hezbollah is putting them in jeopardy. And we expect Lebanon to take action against this, to protest against this, not to give in to this. And the fact that the Lebanese army is doing nothing means that they are either unable or unwilling or both to do anything about this. But it doesn’t absolve Lebanon’s culpability. Their territory is being used to attack our territory. Their territory is being used to dig terror tunnels, to terrorize, kidnap and murder our citizens. Therefore, we hold Lebanon accountable.

And the UN knows this. So, what does the international community do? I think several things are required and I’m going to itemize them.

Ambassador Haley was right when she said two days ago at the UN that Hezbollah must be condemned for, here’s the quote, ‘jeopardizing the safety of the Lebanese people and violating Israel’s sovereignty.’

So I call on all the members of the Security Council to condemn Hezbollah’s wonton acts of aggression; to designate Hezbollah, in its entirety, as a terrorist organization; to press for heightened sanctions against Hezbollah; to demand that Lebanon stop allowing its territory to be used as an act of aggression and its citizens to be used as pawns; to support Israel’s right to defend itself against Iranian-inspired and Iranian-conducted aggression.

I call on the Security Council to demand that UNIFIL fully meet its mandate and deepen its operations. This includes ensuring that UNIFIL has unrestrained access to any area in southern Lebanon, including private and public lands. That UNIFIL has the ability to get to any area quickly, before they cover-up and destroy the evidence. That UNIFIL is not restricted by Hezbollah or the Lebanese army in any way and reports on any obstructions. And that UNIFIL provides detailed reports of any violations to the UN and to Israel in a timely manner.