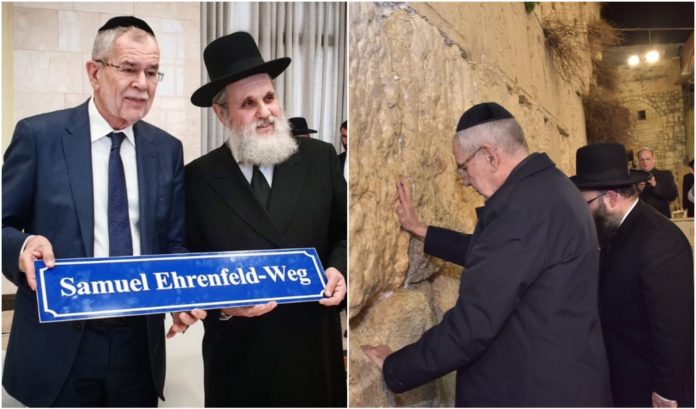 Austrian Ambassador Martino Weiss accompanied the President to the Yeshiva in Kiryat Mattersdorf.

Harav Yitzchak Ehrenfeld Shlita is the Rosh Yeshiva and Rav of the neighborhood, which is named after the centuries-old Austrian town of Mattersdorf, now known as Mattersburg.

Harav Ehrenfeld gifted President Alexander Van der Bellen a silver Yad, pointer, for a sefer Torah. The president gave the Rosh Yeshivah a street sign with the name of his grandfather in Mattersdorf in Austria.

As a small sign of appreciation, President @vanderbellen presented Rabbi Ehrenfeld today with a copy of a street sign from Austria, the Samuel Ehrenfeld-Weg (which really exists in Mattersburg) pic.twitter.com/roDKZ3ZtnC

The Beit Shmuel Yeshiva, under the leadership of the Rabbi of Kiryat Metersdorf, Rabbi Yitzchak Harenfeld, gives the President a silver finger from a Torah scroll, and the president gives the rabbi back a sign with the name of the neighborhood of Metersdorf in Austria pic.twitter.com/3xdnTCgIzf

Visiting the Jeshiva at Kyriat Mattersdorf/Jerusalem (named after Mattersburg/Austria, which used to have one of the oldest Jewish communities of Austria) was another truly memorable moment of this State visit
🇮🇱 🇦🇹 pic.twitter.com/aJiixopd6q

Earlier, President Reuven Rivlin and his wife Nehama held a reception for his Austrian counterpart and his wife, Doris Schmidauer.

The Austrian president was received at an official ceremony during which the anthems of both countries were played. The presidents then reviewed the IDF honor guard and made joint statements. They then held a meeting to discuss the strengthening relations between the two countries.

“We are pleased to host you here in Jerusalem, the capital of Israel, as a true friend of the state of Israel and of the Jewish people”, said Rivlin. “You have often told your story as a refugee child who too time to feel at home in his country- the same country you are now a president of. Our past is the basis of our values, our beliefs, the choices we make.

“The Jewish nation as well have grown from the past and today its building its future here in the State of Israel, a Jewish and democratic state, democratic and Jewish. I believe that cooperation between Austria and Israel will do well for our economies and can also contribute to the world,” added Rivlin.

“Israel is a strong and stable democracy, we will never compromise our values or the security of our citizens… We hope for a day when Israel will live in peace with all its neighbors. In the Middle East, just as it is in Europe, peace between nations must be based on confidence-building measures and long-term cooperation based on common interests.”

.@yadvashem is a powerful place of commemoration and reflection. It is a warning to future generations, a reminder of the fragility of democracy and of the values we so often falsely take for granted. (1/3) pic.twitter.com/pvsdZAu7AZ

(3/3) In times where #antisemitism is once again on the rise we are all called upon to vehemently oppose it in all its shapes and forms – and to stand up for the values of #freedom, #equality, #democracy and peaceful co-existence. (vdb)

Rivlin referred to the Iranian regime being the main source of instability and terror in the Middle East and Europe. He mentioned how the Iranian regime was the enemy wanting to destroy Israel and not being limited to nuclear weapons nor their involvement in Syria and Lebanon through Hezbollah and other.

“It is our duty to take this threat seriously. We must stop Hezbollah’s aggression before we find ourselves dragged into a battle that neither country is interested in.”

Later in the day, Rivlin accompanied President Van der Bellen during his visit to Yad Vashem.

“Unfortunately, anti-Semitism does not disappear. It raises its head around the world, and even more so this past year. In your own country there have been about fifty anti-Semitic incidents in the past year, some of which have been investigated by the police. In conjunction with this, the Austrian government has advanced the EU support in a declaration against Antisemitism. The Declaration stresses the importance of the Education of Holocaust Remembrance and calls on governments to take steps to ensure the security of Jewish communities, Jewish institutions and Jewish citizens in Europe. It would be a disaster if Jews were afraid to express their Jewishness in Europe. In addition the declaration calls upon other countries to adopt the new definition of the International Task Force for the Preservation of the Memory of the Holocaust (IRHA), a definition adopted fully by Austria and eleven other countries in Europe.”

🇦🇹🇮🇱 VIDEO/PHOTOS: #Austrian President Alexander Van der Bellen visited the Kosel, Yad Vashem and met with President Rivlin. . . “I am saying it openly here: Austria bears joint responsibility for the #Holocaust. Many of Austria’s citizens were among the perpetrators and we bow our heads to the victims in humility and modesty. We shared our responsibility too late and this caused difficulties in our relations at the begging, but today Israel is a bastion of freedom and stability here in the Middle East”, Van der Bellen said. #Austria was annexed in 1938 by Nazi Germany in a move welcomed by many Austrians. Some 65,000 Austrian Jews were killed in the Holocaust, according to Yad Vashem. #jerusalem #Israel

Referring to the Austrian responsibility for the Holocaust, Van der Bellen said, “The terrible history also ties us. Tens of thousands of Austrian Jews were murdered by the Nazi regime and many others were expelled and found a new homeland – they built the country and fought in many battles. I am saying it openly here: Austria bears joint responsibility for the Holocaust. Many of Austria’s citizens were among the perpetrators and we bow our heads to the victims in humility and modesty. We shared our responsibility too late and this caused difficulties in our relations at the begging, but today Israel is a bastion of freedom and stability here in the Middle East.”

“Our goal is to ensure that Jews everywhere feel safe. Our responsibility as Austrians to the victims of the Holocaust is to ensure that we live with Israel in peace and unanimity,” the Austrian President stressed.

It is a great honour and pleasure for me to be here today with @PresidentRuvi and to reaffirm the close relationship between #Israel and #Austria. May our friendship continue to grow ever deeper and stronger. (vdb) pic.twitter.com/2sHbxs72jX

The Austrian president was not accompanied on his visit by the country’s Foreign Minister Karin Kneissl, who the Haaretz daily reported that Israel insisted not be included in the trip.

Kneissl was nominated for her post by the Freedom Party, known by its German acronym FPOe, a far-right party with Nazi roots that is boycotted by Jerusalem.

Austria was annexed in 1938 by Nazi Germany in a move welcomed by many Austrians. Some 65,000 Austrian Jews were killed in the Holocaust, according to Yad Vashem. 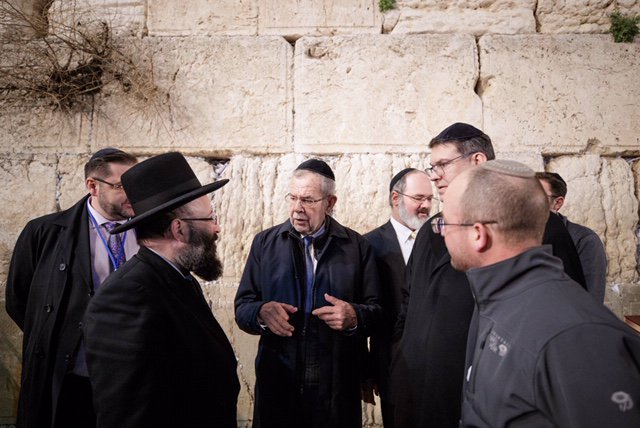 I had very good talks with President @PresidentRuvi today. And I am sure: #Israel and #Austria and are two states who have many plans for the future. (vdb) pic.twitter.com/i4gUWVzEl3

At tonight’s state dinner in honor of President @vanderbellen of Austria and his wife, we raised a glass to flourishing #Israel–#Austria relations now and in the future. 🇮🇱🇦🇹 pic.twitter.com/9UG5YSwRqG

Israel is a world leader in R&D, innovation and technology, homeland security and cyber, medicine and agriculture. #Austria and #Israel already cooperate widely, but I believe further cooperation will benefit both our economies, and could benefit the whole world 🇮🇱🇦🇹 pic.twitter.com/Hze9j7jmuv

There is no better way to start the day for a bilateral Ambassador. It is something truly special to witness such a cordial meeting between two Presidents who know and trust each other 🇦🇹 🇮🇱 pic.twitter.com/6fQyRgYFfm