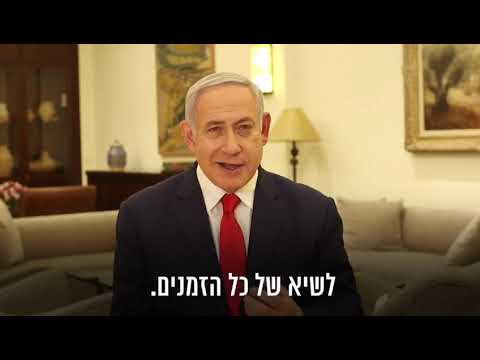 Tensions are mounting between Prime Minister Binyamin Netanyahu and Benny Gantz, who heads the Israel Resilience Party, who according to polls, poses a threat to unseat Netanyahu if he teams with Yair Lapid and his Yesh Atid party.

Gantz is no longer remaining silent, but he is in the thick of his election campaign, which includes trying to discredit PM Netanyahu while showing the nation he is suited to replace him and to step in and save the nation.

In his statements on Tuesday night, Gantz referred to Netanyahu as “the ruler of Israel”, as he explained he has been prime minister for a decade by using incitement, intimidation and instilling fear into citizens.

Then Gantz used his past as IDF Chief of Staff to poke at the prime minister, stating, When I was in frozen foxholes with my soldiers on winter nights, you Mr. Binyamin Netanyahu left Israel, working to improve your English, practicing while attending luxury cocktail parties”.

“While I was in command of the [elite] Shaldag reconnaissance unit, in life-threatening situations on foreign soil, you Mr. Netanyahu worked bravely in makeup session in television studios. While I was training the next generation commander and combatants, you were taking acting lesion in a New York studio.”

The prime minister did not permit the hostile remarks pass, uploading his preliminary response to Facebook, stating he too risked his life for the State of Israel on many occasions.

In the accompanying video, we see Mr. Netanyahu lash out at Gantz under the banner headline, “Benny Gantz, you should be ashamed of yourself!”

He continued to explain that in his military service, he was a combatant and officer in the elite Sayeret Matkal reconnaissance unit and operated on enemy soil to defend Israel as well, placing himself in life-threatening danger many times. “I was almost killed in an exchange of gunfire in the Suez Canal for the nation’s security”, stating how he was wounded, while Gantz wishes to risk the security of the nation with additional unilateral withdrawals and concessions to Israel’s enemies.

Gantz added, “In a month-and-a-half we will have to choose between a ruler with Bostonian English, luxury suits and heavy makeup and a real Israeli leadership, one that is caring and not phony, but authentic”.

Netanyahu fired back at Gantz’s comments regarding his Bostonian English, explaining his oratory skills are essential today to address the international diplomatic community as he continues doing on a regular basis.

Former Jerusalem Mayor Nir Barkat, who holds a realistic spot on the Likud ticket, called on Gantz to retract his statements, explaining that even during an election race one must remain respectful and things that were said about a prime minister should not have been said.