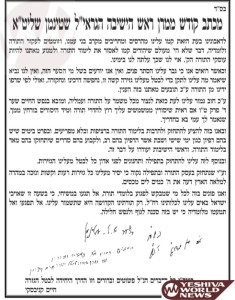 The Gadol Hador refers to the ongoing process by which the government plans to draft bnei yeshivos into the IDF, threatening the status quo that existed in Eretz Yisrael for the past decades, permitting avreichim to continue with their limud Torah. Rav Shteinman calls on bnei Torah to prepare to be moser nefesh and stand firm in opposition to these efforts. The Rosh Yeshiva calls on the tzibur to be m’chazek our tefilos and to be mispallel to HKBH to remove these gezeiros.

He concludes with a call to the powers that be, to refrain from taking this step, delivering a blow to lomdei Torah at this time when the enemies of Israel plot our demise R”L. Rav Shteinman points out that only the Torah will save us from them and therefore, appeals not to target them and reduce their limud which is ongoing day and night.