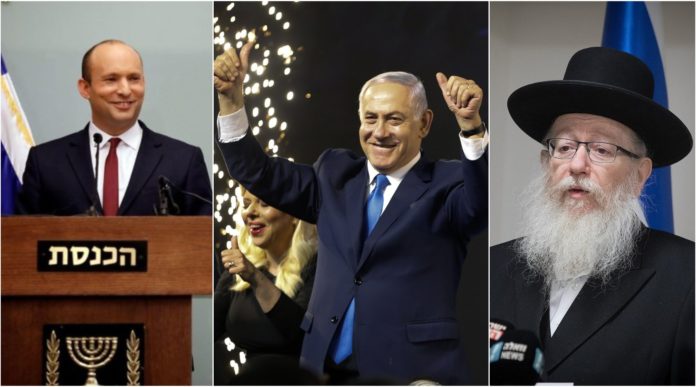 The Central Election Committee has published the final tally of Knesset votes following Tuesday’s election, and has confirmed that the New Right Party did not meet the electoral threshold to qualify.

The party, headed by the current Education Minister Naftali Bennett and Justice Minister Ayelet Shaked, was teetering on the brink of passing the minimum 3.25% threshold, but has failed to do so.

This follows the counting of the final 265,000 ballots from IDF soldiers, oversees diplomats, medical staff and patients in hospitals, prisoners and disabled people, representing about six percent of the total number of ballots cast in the election.

Following the final tally of these extra votes, Prime Minister Benjamin Netanyahu’s Likud party gained a seat and rose to 36, receiving 26.45% of the vote, breaking a tie with Benny Gantz’s Blue and White party who has 35, at 26.11% of the vote.

The pair were followed by Shas who came in third with 8 mandates. Yahadut HaTorah dropped a seat from 8 to 7. The United Right got 5 mandates as did Yisrael Beiteinu. Kulanu received 4 mandates. This leaves Netanyahu with a 65 seat right-wing bloc to form a governing coalition.

On the other side of the spectrum, the Labor party and Arab Hadash-Ta’al party both got six mandates, while Meretz, and the second Arab Ra’am Balad party received four.

According to the committee, the final count resulted in the need for any party to have a minimum of 139,744 votes to meet the threshold. The New Right party remained around 1,400 votes short, ending up with 3.22% of the votes.

Both the New Right party and Yahadut HaTorah had called for a delay in publishing the final count, and are demanding a recount. The New Right said the party had received over 1,000 complaints about ballot irregularities, while Yahadut HaTorah said mistakes had been recorded at five polling stations in Chareidi areas, including Bnei Brak, Ashdod, Beit Shemesh and Haifa, leading to suspicions some of the ballots counted in the ballot boxes were not legitimate votes.

Although the ballot count is complete, commission head Hanan Melzer said the results were not official and still subject to review. He said final certified results are to be handed to President Reuven Rivlin next Wednesday.

The New Right had one of the most disappointing performances of the election. Bennet and Shaked, both popular ministers, split from their religious-nationalist Bayit Yehudi party and sought greater power by appealing to new secular voters. The maneuver backfired.

“As we have said, we are not giving up,” Bennet and Shaked said in a statement, which quoted Meltzer and stating the results are not final. “We will accept the voter’s decision, but will not rest until we find out what that decision truly is.”

Bennett earlier told reporters: “I’m praying to God and fighting for every vote.”

Ichud Leumi party chairman, MK Betzalel Smotrich tweeted “There is a very bad smell here of a deliberate attempt to conceal mandates from the right, and it is absolutely forbidden to let this occur.”