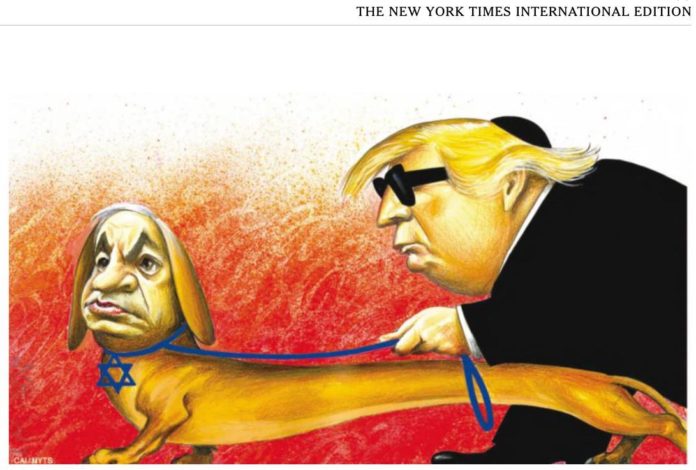 The New York Times has apologized a second time for an anti-Semitic cartoon that appeared in the newspaper’s international edition.

It showed Israeli Prime Minister Benjamin Netanyahu as a dachshund wearing a Star of David collar and leading a blind and skullcap-wearing U.S. President Donald Trump.

A tweet from the New York Times Opinion account Saturday said the image “was offensive, and it was an error in judgment to publish it.”

The Times says the cartoon was provided by The New York Times News Service and Syndicate, which has since deleted it.

The Times apology came Sunday afternoon after it issued an earlier statement saying it was wrong to run a cartoon that contained “anti-Semitic tropes.” But that statement did not contain any apology.

The new statement said: “We are deeply sorry for the publication of an anti-Semitic political cartoon last Thursday in the print edition of The New York Times that circulates outside of the United States, and we are committed to making sure nothing like this happens again.”

“Such imagery is always dangerous, and at a time when anti-Semitism is on the rise worldwide, it’s all the more unacceptable,” it continued.

The paper said the decision to run the syndicated cartoon was made by a single editor working without adequate oversight.

“The matter remains under review, and we are evaluating our internal processes and training,” said the statement. “We anticipate significant changes.”

We apologize for the anti-Semitic cartoon we published. Here’s our statement. pic.twitter.com/nifZahutpO

An Editors' Note to appear in Monday’s international edition. pic.twitter.com/1rl2vXoTB3

Even if unintentional, the left has normalized anti-semitism under the guise of criticizing US-Israel foreign policy. It is radicalizing people.

NYT was latest example along with their weak-at-best apology. pic.twitter.com/dPctp2OrQ8

.@nytimes Editors & associates had to sign off on such an offensive anti Semitic cartoon for it to be published. Who are they & how is NYT holding them accountable?
Deletion & an editors 'note' are just not gonna cut it. The public demands accountability. The Times should too. pic.twitter.com/K17XdGnsBH

Whoops?! You let a repugnant antisemitic cartoon “slip” through all your editorial layers and now you’re excuse is was provided by your syndicate?! Therefore what?@nytimes ur antisemitism is showing. You may want to obscure it just a little bit so u can get back to biz as usual https://t.co/CzkWZ75z2s

NYT is a hit with their key demo https://t.co/VDVSitSMM4