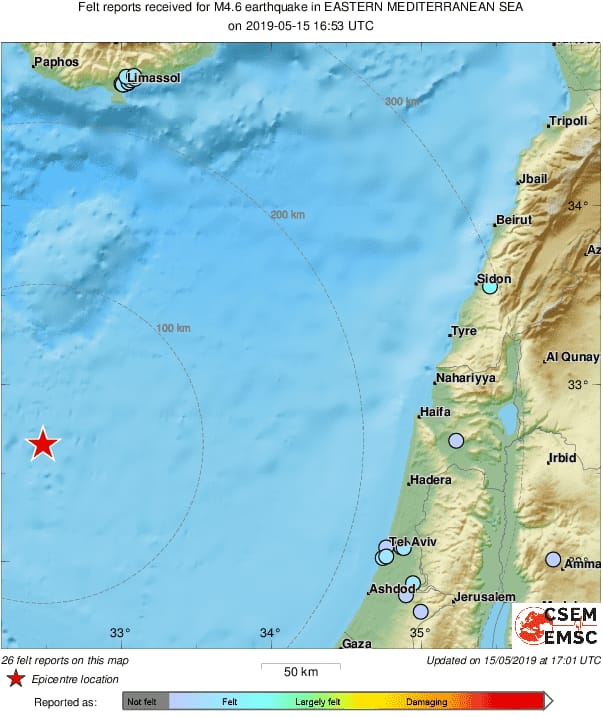 An earthquake was felt in many parts of Israel, Wednesday evening.

The quake was not particularly strong, measuring 4.6 on the Richter scale.

The Geophysical Institute reported that the epicenter of the earthquake was at sea, between Hadera and Haifa, about 200 kilometers (125 miles) from the Israeli coast and 157 KM north of Port Said, Egypt.

Thus far, no injuries or damage was reported as a result of the quake

This earthquake was felt in #Israel #Palestine #Cyprus #Egypt
There is no tsunami risk https://t.co/Iei91qqIBk

The Home Front Command reissued its instructions of what to do in case of an earthquake to the entire populace. The instructions read: “In case of an earthquake, an open field is the safest place to be. If you are inside, go into your bomb shelter and leave the door open. If there is no bomb shelter inside your house, go into the stairwell, and if you can, head down to the exit of the building. In the case where you cannot act accordingly, and only when it is impossible to do so, find shelter under a heavy piece of furniture, or sit on the floor next to an internal wall.

Israel is located along the Syrian-African fault line, which runs along the Israel-Jordan border, part of the Great Rift Valley that runs from eastern Lebanon to Mozambique. A major earthquake is statistically due to strike Israel every 80-100 years. A major earthquake last struck Israel in 1927, registering 6.2 on the Richter Scale and killing 500 people.

BREAKING: A 4.6 magnitude earthquake was felt throughout Israel. According to initial assessments, the earthquake occurred in the Eastern Mediterranean, 223 km from Israel’s coast. https://t.co/oqMiGcE5e0 pic.twitter.com/AOZLF0PoCU