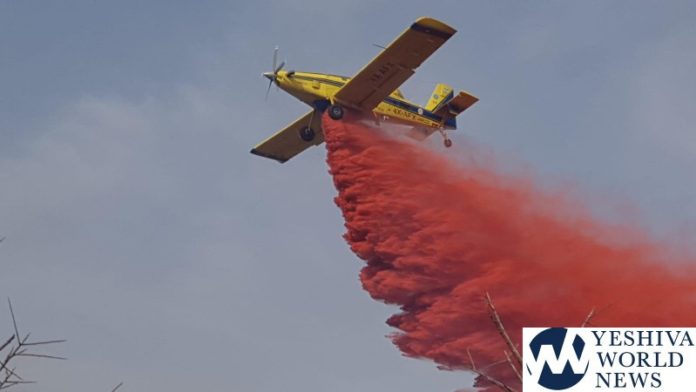 A pedestrian was hit by a train and killed near the Segulah train station on Motzei Shabbos. United Hatzalah volunteer EMT Avi Mearah said that “Due to the severity of the injuries sustained, there was nothing for first responders to do except to pronounce the death of the person involved.”

Fires that had been burning since Thursday across Israel continued to burn on Shabbos. Many of these fires were declared as being caused by arson and it is suspected that Arabs were the ones setting the fires. The Jerusalem district Fire Department Spokesperson Udi Gal said that a large number of firefighters were dispatched to combat a very large brushfire that was set under the Uzi Narkiss bridge that connects Pisgat Ze’ev to Jerusalem. “Just today six fires were lit by arsonists in that location. This has previously happened in that area numerous times.” The bridge is close to numerous Arab neighborhoods including the refugee camp in Shuafat.

A large fire broke out in the ara of Menachamia in the Jordan Valley. The fire burned dangerously close to Yavniel and crossed the border into Jordan. The fire caused Highway 90 to be closed for a short time between the town of Gesher and Menachamia.

On Motzei Shabbos the Left-Wing and Arab opposition parties sponsored a large protest against numerous proposed legislations that the right-wing parties are trying to pass int he Knesset. Among the speakers was Arab MK Ayman Uda, who in the past has been accused of supporting terrorists against Israel. Leader of the Labor party Avi Gabbai as well as leaders of Blue and White party Benny Gantz and Yair Lapid, and Tamar Zandberg of the Meretz party all spoke at the rally. Former Prime Minister and convicted felon Ehud Olmert ironically spoke out against corruption in the government. Olmert himself was arrested and convicted on exactly that charge.

A one-year-old infant was seriously injured after it fell out of a stroller and down three flights of stairs in a stairwell in a building in Ashdod. United Hatzalah volunteers and ambulance team treated the child at the scene before he was taken to the hospital for further treatment.