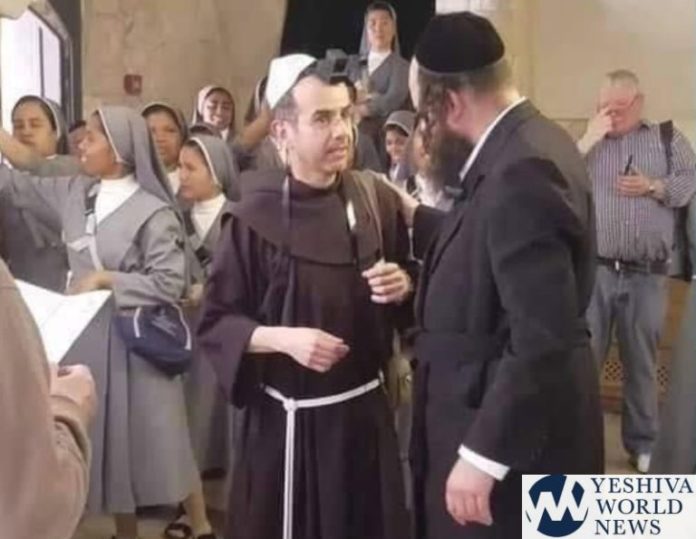 It was a strange sight to behold – a picture of a priest who was wearing Tefillin. The story behind the picture? It was at the burial site of Dovid HaMelech located on Har Tzion in the Old City of Jerusalem. Christians visit often because it is adjacent to the alleged site of what Christians call, “the Last Supper.” The priest had come with what appears to be about ten nuns. A Rabbi, Rabbi Shraga Brand, asked the priest whether he was Jewish or not.  The priest responded that he was. The Rabbi then proceeded to put Tefillin on him.

The picture prompted somewhat of a firestorm. Was the Rabbi correct? Do we apply the dictum of Chata – yisroel hu – a Jew who sinned is still a Jew? Or do we say, “Sorry, this man has gone so far beyond the pale that we no longer look at him as a Jew regarding encouraging him to put on Tefillin!”?

The Gemorah in Sanhedrin (44a) takes the verse in Yehoshua (7:11) – where Hashem tells Yehoshua that Achan had sinned by saying Chata Yisroel.  The Talmud understands this to imply another lesson as well.  Even though Yisroel sinned – he is still considered a Jew.  But does this refer to Klal Yisroel collectively as a people?  Or can this dictum be applied to individuals as well?

EVOLUTION OF MEANING IN THE TERM

We must also realize that in Talmudic times the term “mumar” did not necessarily mean what it means now.  It meants someone who did away with the observance of a Mitzvah or two. By the times of the Gaonim – the term “mumar” applied to someone who gave up his religion for another.

By the times of the Gaonim (Otzar HaGaonim Kiddushin 78) it was established that a Mumar – one who left the religion does not inherit his father.  Many Rishonim also subscribe to this view (Rashba Vol. VII #292, see Ohr Zaruah BB #103).  They view it as an exchange of nationhood (see language of the Rashba). Rav Amram Gaon even writes “ho’il venafka mitoras Yisroel v’ayalah betoras goyah – since she left being considered a Jew and chose to live as a non-Jew.

What about for marriage purposes?  Rashi Yevamos 47b rules that a mumar is considered as a Jew for all matters of Kiddushin.  The Baal HaIttur (#`32) writes that if a woman had a brother in law who was a mumar and her husband died – she requires neither yibum (the Levirite marriage where the brother of a deceased brother must marry his widowed sister in law) nor chalitzah (the special divorce like procedure wherein the brother refuses to marry his widowed sister in law).  This would seem to disagree with the aforementioned Rashi.  The Ohr Zaruah Hakotton even writes that if he was an apikores when his brother had died – she goes out without chalitzah even if the brother subsequently repented and did Teshuvah.

The Radbaz Vol. VII #251 writes that from a Torah perspective an Apikores’s marriage is not considered a marriage.  It is just that Rabbinically we are concerned that perhaps he did Teshuvah.

The Targum Unkeles on Shmos 12:43 when discussing the Korban Pesach and the term Ben Naychar – writes that any Jew who was yishtamed may not eat of it either.

DIFFERENCE BETWEEN INQUISITION TIMES AND NOW

It is also important to draw a distinction between the term “Mumar” when applied to victims of the Inquisition (the Anusim) and the term “Mumar” as applied to someone who converted out of sheer free will.  The former is still treated as a Jew in most respects while the latter is not.  In the teshuvos of the early Acharonim the term was applied also to the Anusim.  Fascinatingly enough, if one of the Anusim had the chance to leave but chose not to do, then the Acharonim dealt with him like someone who converted out of Judaism out of sheer free will (See Maharadach Siman 9 and 20).  The Ramah (YD 124:9) writes that such people are treated as complete idol-worshippers.

The Rambam as well in Hilchos Avodah Zarah 2:5 writes very clearly that they are not to be considered as Jews for any matter.

The Maharatz Chajes writes (Minchas Kana’us p. 1004 in all his collected writings) about people who negate the Mitzvah of Bris Milah “ub’shain yisroel ain mechunim – they are not to be called Jews.”  He specifically writes this in terms of our interactions with them.

The Baalei HaTosfos in Sanhedrin 72b “Yisroel” write that a mumar is not considered a Ben Bris.  The Beis Shmuel EH 141:47 cites this Tosfos as halacha as does the Mogain Avrohom OC 189:1.

It is this author’s conclusion that the Rabbi should not have put Tefillin on the priest on account of the near unanimous views of the Gedolei HaPoskim cited above.  On the other hand, from the priest’s perspective, he is still obligated in all of the Torah’s Mitzvos.  The way we should treat him, however, is quite different.  It seems that even from a Torah perspective we should treat him as a goy for all matters.  This author also checked with Rav Dovid Harfenes, one of the leading Poskim in New York and he responded, “Chas v’Shalom.”

This is not to cast any aspersions on the remarkable work of Rabbi Shraga Brand.  Clearly, the man is a tsaddik as seen in his sheer dedication.  It is just that in this particular case he erred, in this author’s opinion.

The issue is not one that is insignificant.  There is an organization which calls itself Jews for J or “Messianic Judaism.  The appoint “Rabbis” and have Yeshivos as well.  They are not Jewish and should not be considered or treated as Jews according to the Torah sources mentioned above.  Allowing this false flag identity to persist is one that should be fought at every step of the way.

Another issue is whether we believe the priest in his identification that he is, in fact, Jewish.  Generally speaking we do not recognize claims of Judaism with no proof whatsoever.  Tefillin is one of the special osos that Hashem gave His people.  We are instructed to cover them too so that they not be seen.

Volume Nine of Rabbi Hoffman’s “Not Your Usual Halacha” series is now available on Amazon.  Click here to order!