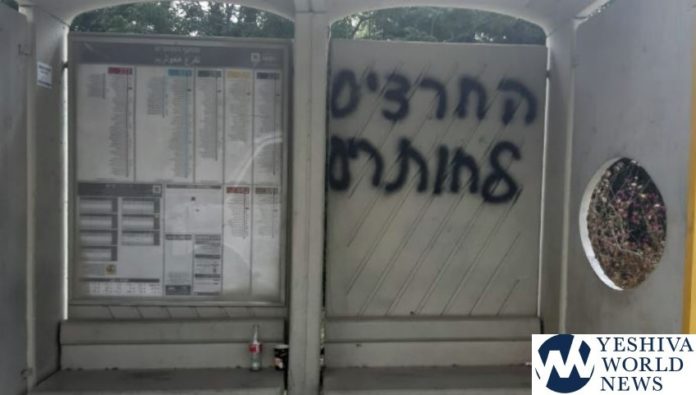 Graffiti against the chareidi tzibur was sprayed in the Carmel Coast Regional Council in recent days, including the community of Atlit, where this graffiti came against the backdrop of further harassment of Chabad Chassidim who live in Atlit.

It appears that the background to harassment and spraying of the graffiti against the chareidim is the intention to transfer a Chabad school where their children study to the Beit Yosef school building, which has been standing empty for several years in Atlit.

According to one of the parents, one of the reasons leading them to suspect the empty school building being connected to the graffiti against the Chabadniks is that “chareidim to Chotrim” was written, referring to Kibbutz Hachaim, near the community of Atlit, where council head Asif Isaac lives. It was he who came to the realization regarding the need to move the school from its present location in Kfar Sitrin to the community of Atlit, where the empty building is located. The building is not used other than a limited number of afternoon classes.

A Lubavitcher Chassid who lives in Atlit, who spoke with Ladaat News said that the war declared by a small handful of people was not just graffiti against the chareidi tzibur, but that the harassment was done against every ‘dvar kodesh’ as they began having issues with a shul located in a shelter while the other shelters in the community are neglected and not readied for emergency use, yet they are making an issue of the one being used for a shul, claiming if it is needed in emergency, there will be problems.

It is added that with changing demographics in many communities, including Jerusalem for example, there are school buildings standing idle, building used in the past for the secular and dati leumi communities, while chareidi children are all too often compelled to study in corrugated caravan buildings under harsh conditions.