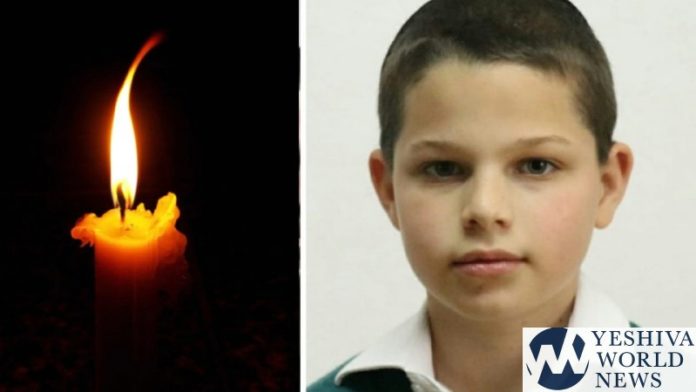 YWN regrets to inform you of the tragic petira of 11-year-old Chaim Binyomin Biegeleisen Z”L, who was the victim of a hit-and-run on Golda Meir Blvd. in Jerusalem’s Ramot neighborhood during Chol Hamoed Pesach. He was gravely injured and remained hospitalized since. He was Niftar on Sunday morning at Shaare Zedek Hospital in Jerusalem.

The Levaya was held on Sunday at 2:30PM at the Ohel Yosef shul in Ramot Ungvar and the Kevura at Har Hamenuchos.

In May, police arrested Netanel Sandrusi as the primary suspect in the case, as reported by YWN-Israel. Police then realized they are uncertain if he was the driver, or perhaps his friend, Maor Gamliel, his friend who was also taken into custody. They have since learned the details of what took place and a criminal indictment was filed against them in the Jerusalem District Court about a month ago. They remain incarcerated at this time.

[Announcing the Levaya in Eretz Yisroel. Video via Moshe Blau]

On a Sunday, Chol Hamoed Pesach, during the evening hours, Sandrusi was driving on Golda Meir Blvd. in Jerusalem with Gamliel with him in the vehicle. They got to the corner of Golda Meir and Mersky Street, while exceeding the speed limit for the area. At that moment, the 11-year-old Chaim Binyomin was crossing and Sandrusi, who was speeding, hit him in the crosswalk.

They stopped shortly after hitting him and they switched drivers. They sped off without either of them doing anything to assist the gravely injured child or at the very least, calling for an ambulance.