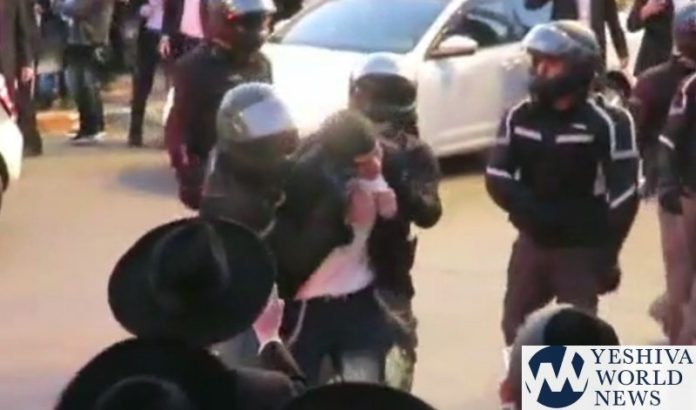 Following the suspension of an Israeli police officer for dragging a Chareidi protester this past Friday by his peyos, new disturbing footage has surfaced showing the same behavior by Israeli Police.

The attached showing footage was released by Bichadrei Charieidm and given to YWN.

It is from a protest in Bnei Brak around 7 months ago.

A complaint was made to police, but nothing ever happened, and no action was taken.

Watch how an officer drove a police motorcycle into a Yeshiva Bochur, and then other officers drag him forcefully by his Peyos, followed by him being violently kicked by police.

In light of recent Israel Police violence, Minister of Public Security Gilad Erdan said at a ceremony to appoint new Northern Israel District commanders that there should be zero tolerance for unnecessary police violence. Erdan promised to fight against the phenomenon of police officers taking advantage of power and announced that a special unit would soon be established to combat the violence.

“This is my responsibility and that of the police commissioner, and I expect these norms from every commander in the organization. I have learned and am afraid that some policemen who acted against the law continue to serve in the organization and that there is forgiveness for unnecessary police violence. It also touches upon manifestations of racism.”

“The police have done amazing work in recent years in order to get closer to the chareidi public and the Ethiopian community and there were amazing achievements.”

Erdan revealed that he plans to set up a special unit to fight police violence.

Meanwhile, MK (Shas) Moshe Arbel on Monday evening turned to the head of the Justice Ministry’s Police Investigations Unit (PIU) regarding the investigation into the policeman documented pulling on the peyos of Yehoshua Mordechai Kroizer during his arrest in Beit Shemesh. Arbel indicates that the penal law states the policeman should be sentenced to three years imprisonment for his actions.

Arbel sent a letter to the unit’s head, attorney Karen Ben-Menachem, in which he explains that the video evidence in the case is clear and the responsible person, the policeman, must be held accountable.

He adds that the video is not complete, and there may be a cause for Kroizer’s detention pertaining to his actions prior to the arrest. However, even if there was just cause, this does not constitute a “free pass” for police to treat civilians as they wish, with violence or to humiliate them on the basis of religion. “There is absolutely no justification to pull a Jews’ peyos, and in general, regarding anyone resisting arrest, and certainly for one who does not resist. This is a disproportionate violation of human dignity”, he writes.

According to Arbel, “A Jew’s peyos have always been a sign of one’s Jewish identity, a symbol of his devotion, his beliefs and his religious affiliation. In his actions, it appears that the policeman had therefore committed an offense under section 170 of the Penal Code, which states: ‘A person who destroys, harms or desecrates a place of worship, or any object held sacred to the public for the purpose of abusing their religion, or knowingly that they may regard this act as an insult to their religion, shall be liable to three years imprisonment’. This, in addition to the offense of violence committed. The full extent of the law must be exhausted in the matter of the policeman.”