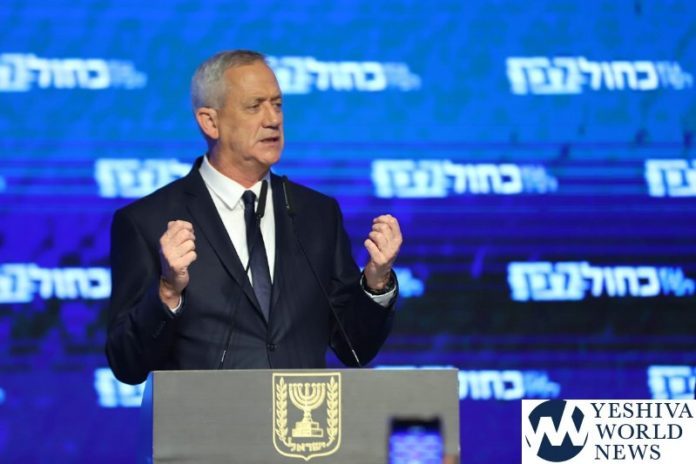 With the election for 22nd Knesset set for Tuesday, September 17, 2019, the chairman of the Blue & White party is now showing what many right-wingers are calling “his true colors”.

Gantz was interviewed on motzei Shabbos by Ayalah Hasson of TV News13, asking him about his view for a future coalition government that might include the chareidi parties. He was ambiguous in his response and was unclear regarding the inclusion of chareidim in a coalition government headed by him.

Gantz had warm words pertaining to Shabbos, stating that “Shabbos is the best thing that the nation has” but feels each person must have the right to observe the day as s/he feels. “Behold, I am a secular traditional person. I traveled today in my vehicle, and parked in area X. I walked to shul, Parshas Re’eh. By the way, I can tell you that there are two or three interesting phenomena there. The word ‘choice’ (בחירה) appears 17 times. Man has to choose his way at any given moment.”

Hasson:
Do you go to shul every week to hear the weekly parsha?

Gantz:
I make a point of going from time to time, but I set for myself, specifically due to the heavy pressure that is my reality, I try to maximize the 24 hours of Shabbos to my benefit as much as possible. I am not a religious person. I drive on Shabbos. I respect others”.

Regarding public transportation on Shabbos, Gantz responded, “In areas where there is a demand, and it does not bother others – it will be what it will be. We said this all heard this. It is written black on white in our platform”.

Hasson:
Do you plan to have the chareidim in your coalition?

Gantz:
I plan to establish a nationalistic Zionist liberal coalition, which will not be blackmailed by anyone.

Hasson:
Is Yahadut Hatorah a Zionist party in your eyes?

Hasson:
Do you plan to have the chareidim in your coalition?
I will give them a paper and they will complete two-thirds, and I will complete the bottom third.

I hope to be the largest party, to be in a position to decide the basic guidelines. Others will have to fall in line with me and not me with them. The majority in Israel is secular, traditional and religious. There is a chareidi sector in the country which must be respected. The majority must act responsibly to represent what the majority would like, and there is a great responsibility to be concerned with the minority. We will succeed and establish [a coalition].