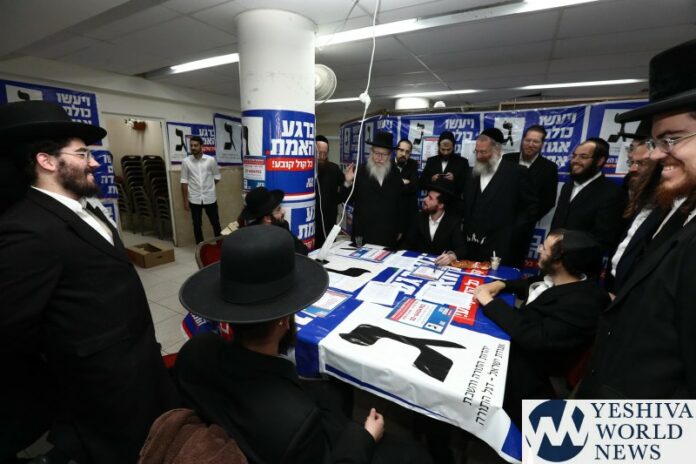 There is concern in the chassidic camp in Eretz Yisrael today, Tuesday, September 17, 2019, Election Day for the 22nd Knesset, based on a high voter turnout among the general population in the last election.

The election campaign activists in the different chassidic courts are working hard to get the tzibur out to vote, as a high voter turnout among the general population works against the frum community. One reality that signals concern perhaps, in some of the communities, is the realization that some Rebbes have come out calling on their chassidim to vote, a move that is not the norm for the Rebbes.

The Pinsk-Karlin Rebbe Shlita told a number of chassidim who asked if they must vote, as they wished not to; not to look for new chumros (stringencies). The Rebbe added, “We have a tradition from the Avos, and each person should act in accordance with their father’s minhag”.

This election represents another first, as in election adverts by ‘Gimmel’, Yahadut Hatorah, photos of Admorim appeared. This was not the case in the past.

In the Biala Court in bnei Brak, chassidim do not plan to vote because they are upset with the Agudas Yisrael and Shlomei Emunim. However, on Tuesday morning, the Rebbe changed his mind, instructing chassidim to vote. The Rebbe feels that while Agudas Yisrael has not acted appropriately, the situation today is comparable to a ‘shipwreck at sea’, and one is prohibited from drilling a hole in the ship to cause it to sink.

In Gur, a recorded notice has been released by the Rebbe Shlita, asking chassidim if they have voted yet and how many votes can they bring to the polling station. This led to phone calls to chassidim to encourage and push them to vote. According to a spokesman during the morning hours, the voter turnout among chassidim was 29%, which may lead to additional complacency among chassidim in general.

As a result of the announced voter turnout at noon, the top MKs on the Blue & White list; Yair Lapid, Gabi Ashkenazi, Moshe Ya’alon and the party leader and candidate for the premiership, MK Benny Gantz, conferred in an urgent response to move and began increasing efforts to bring out supporters in areas where they maintain strong representation.

Blue & White began pressuring activists in the Center, Hasharon and Haifa areas, which are supposed to be large Blue & White camps. The party leaders released recorded phone messages to regional and local activists to apprise them of the situation.