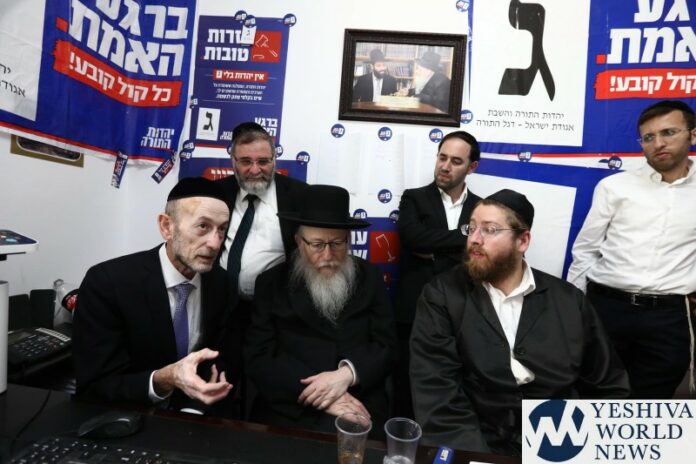 Yahadut Hatorah MKs Yaakov Litzman and Uri Maklev traveled around Israel on Tuesday morning to encourage voters. When they reached Be’er Sheva, they recorded and released a video, warning voters that the situation is not good and that Yisrael Beiteinu chairman Avigdor Liberman urged his supporters to flock to the polls to vote against the Chareidi sector. Litzman said: “We must block this hatred of religion” and urged the community to vote as soon as possible “so we won’t need to cry tonight.”

Maklev added that the signs of the hatred, false incitement and denigration of the Chareidi community can be seen at the polling stations. “We saw people coming to the polling stations who seemed as if they weren’t making independent decisions, that something was pushing them. The voting rate is high. This is something that should worry everyone. This isn’t just a cry of gevalt. This is the true situation.”

The MKs told a B’Chedrei Chareidim reporter that they fear “the day after” due to the unexpected rise in voter turnout [compared to the April elections] in the Israeli general public which could harm the Chareidi parties as well as the right-wing bloc in general [due to the proportional representation electoral system in Israel].

Deputy Minister Meir Porush said earlier on Tuesday: “I’m a little worried. I have to tell you that we received information in the last few days that a high percentage of secular people will stream to the polls. I’m worried. I’m telling you – you need to bring people [to the polls] and get people out of their homes [to vote].”

Another report on B’Chadrei Chareidim said that MK Moshe Gafni passed a group of Talmud Torah boys on Tuesday morning who were enjoying their recess outside in Givat Ze’ev while he was conducting a tour of polling stations. The boys spotted him passing by on the street and began singing to him. Gafni approached the children, explained the situation and incitement and requested that the children daven for the success of the Chareidi community in the elections. The children immediately began reciting Tehillim.

“We’re in great danger,” Gafni told the boys. “They want that chas v’chalilah when you grow up that you won’t be able to learn Torah. We won’t allow this to happen.”

“You’ll grow up to be gedolim in Torah. Daven a lot that we’ll be successful, that the Gedolei HaTorah will be successful. In the merit of the tefillos of the children, we’ll win over these evil people who want the Torah to be forgotten from the Jewish people.”