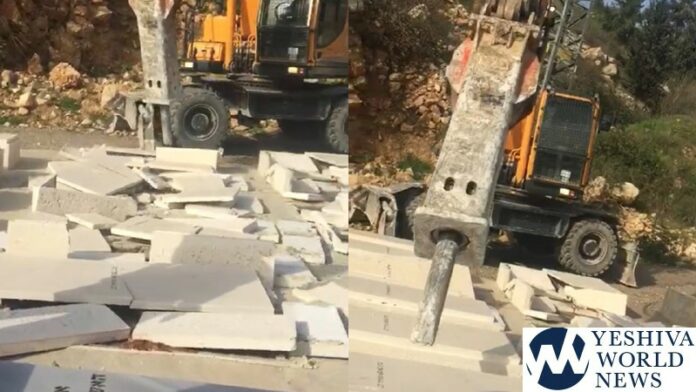 A video posted on social media on Monday raised a furor in Israel. The disturbing footage showed a tractor destroying matzeivos on Har Hamenuchos as policemen and municipal inspectors calmly look on, according to a B’Chadrei Chareidim report.

In the video, the woman who is filming it is heard yelling: “There are niftarim here! You’re not ashamed?” As she spoke, the tractor continued to wage destruction, knocking down another row of matzeivot.

“Come here and we’ll talk about it nicely,” one of the municipal inspectors told the woman. “What’s nice about this? You’re not ashamed? What will I tell the families? You can’t do this. It’s a cemetery!”

As the woman continued to protest, one of the officials responded: “No one told you to sell [burial plots] illegally.” The woman retorted: “You want to dig up dead bodies?” and the official responded: “We’re not touching the bodies.”

An investigation by B’Chadrei Chareidim into the circumstances behind the shocking footage revealed that not everything can be taken at face value. The video in question was actually filmed a few months ago and was the result of a ruling by the Jerusalem District Court against a private company, Evison Israel Ltd. and a private citizen, Mrs. Eva Tzarfati.

Evison and Mrs. Tzarfati own land on Har Hamenuchot and in 2012 they applied for a building permit. Their application was denied but nevertheless, they carried out the construction of a cemetery on the land without a permit.

Evison and Tzarfati filed an appeal and the Jerusalem Municipality – through the state of Israel – filed an appeal on the leniency of the sentence. Both appeals were rejected.

The Jerusalem Municipality told B’Chedrei Chareidim that the site in question is a burial site adjacent to the Har Hamenuchot cemetery in Givat Shaul. “Mrs. Eva Tzarfati is the partial owner of the site, on which substantial illegal construction has taken place. Several legal proceeding between Tzarfati and the Jerusalem Municipality have been in process for years. She was found guilty in all the cases that have been ruled on by the courts, including the Supreme Court, and accordingly, valid demolition orders have been issued and fines have been imposed. Despite this, Mrs. Tzarfati systematically violates the court rulings.”

Regarding the video of the destruction of the kevarim, the municipality commented, “The demolition seen in the video posted online was carried out a few months ago. Jerusalem Municipality officials supervised the demolition order being carried out in order to unequivocally ensure that no burial plot in which someone has been buried would be damaged.” Furthermore, the municipality requested to emphasize that “all the matzeivot filmed in the video are dummy headstones.”

The Ministry of Religious Services clarified that the kevarim seen in the video were actually empty kevarim which had been prepared to use for burial but no one was actually buried in them. “The headstones were built in lots that were sold to people who sought to ensure their burial there after 120,” the Ministry said. “Evison erected the headstones in order to prevent future eviction.”

The Ministry of Religous Services emphasized that the court had fined Evison and Mrs. Tzarfati for an unprecedented amount of NIS 5.5 million in January 2018. As stated above, Evison dug kevarim at Har Hamenuchot without permits and chose to ignore the law and court rulings.