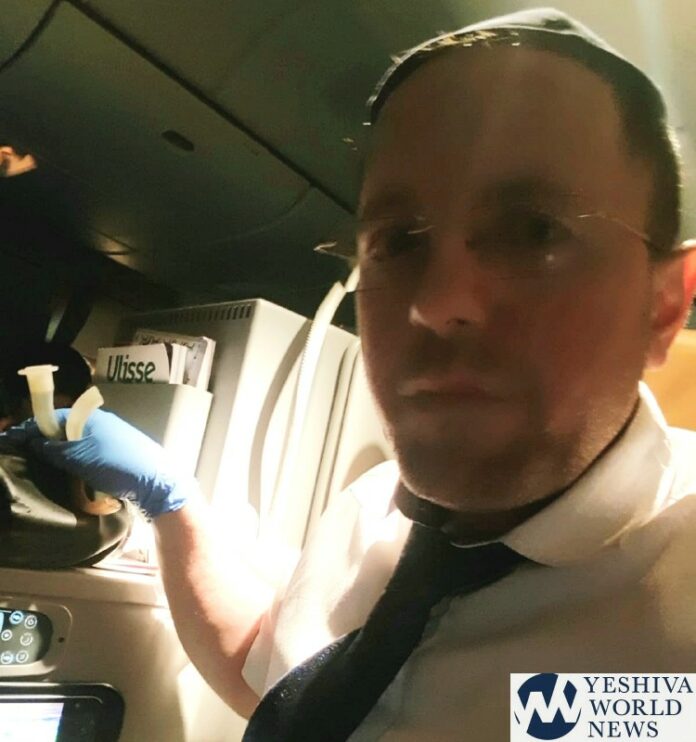 Over the course of two days, United Hatzalah EMS volunteers conducted two in-flight rescues on different airlines across the globe from one another.

The first incident took place on an Alitalia flight between Mexico and Rome on Monday when a 50-year-old man lost consciousness and required assisted breathing. United Hatzalah volunteer EMT Yossi Refaeli, who has family and business in Mexico and travels to the country multiple times a year, was on the flight and responded to the announcement by the flight attendants requesting medical assistance with one of the passengers.

“After the announcement was made, I stood up and approached the crew who directed me to a passenger who had lost consciousness and had trouble breathing,” Refaeli recounted. “I asked for the medical kit on the plane and began to provide assisted breathing to the passenger. He was in very serious condition and I told the crew that we needed to land the plane as soon as possible and to instruct the ground crew to have a mobile intensive care ambulance waiting to receive the passenger. The plane landed and the passenger was transferred to the ambulance to be taken to the nearest hospital. I don’t know what his status is now but the treatment we provided on the plane and the fact that we got him to the hospital quickly gave him the best chance at survival.”

The second incident occurred on Wednesday on a Cathay Pacific flight from Hong Kong to Israel. United Hatzalah volunteer EMT Yehezkel Rosenbaum from Kiryat Malachi was flying back home after a short visit in Hong Kong. He was relaxing when the flight crew asked for medical assistance over the intercom. Rosenbaum stood up and approached the crew who brought him to a patient who had fainted. Rosenbaum began taking vital signs when the patient regained consciousness. He was joined by a nursing student who was also on the flight and the pair took a full set of vitals and gave the man sweet juices and sugar water to help raise his blood sugar.

“The man’s vitals came back inconclusive as we couldn’t do a proper check of his blood sugar levels due to problems with the glucose meter inside the on-board medical kit,” explained Rosenbaum. “We gave him sugar water and other sweet liquids and he regained consciousness fully. I together with the nursing student took turns staying with him for the rest of the flight. As the danger seemed to have passed we told the crew that there was no immediate need to land and the flight continued to Israel. As a goodwill gesture, the flight crew gave me a voucher for $50 dollars which I told them was unnecessary, but they insisted.”

Refaeli had some advice for medical personnel flying based on these experiences. “I recommend that EMTs, as well as all medical professionals, sleep a bit less on flights and be aware of what is going on around them. If you are asleep on the flight you might miss the announcement should an emergency be taking place. Had I been sleeping or missed the announcement this person would not have received the treatment when he did and we may have arrived with a body instead of a live patient.”

Both airlines expressed their thanks to the volunteer EMTs for their assistance during these emergencies. “This is what we do,” said Rosenbaum. “Helping people no matter where one happens to be is the spirit and ethos of what it means to be a volunteer with United Hatzalah.”