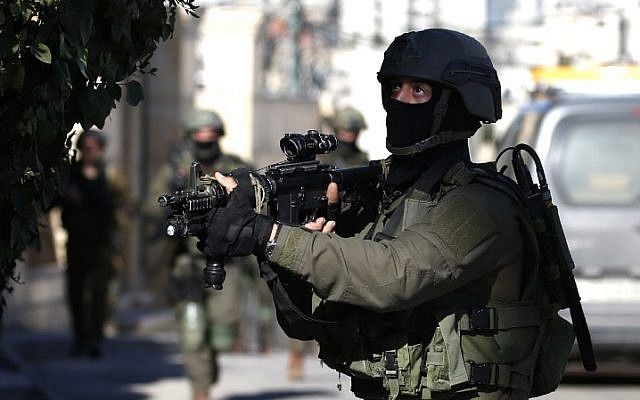 Soldiers from Nachal Chareidi (Netzach Yehuda) were arrested by IDF military police for taking part in a brawl with Bedouins in a gas station after returning from the levaya of Asher Hazut Z”L, who was killed in a lightning strike on Zikim Beach during a Chol Hamoed Sukkos outing with family members.

The soldiers in custody are from the Kfir Brigade of Netzach Yehuda, and they were taken into custody on Tuesday by military police.

According to the KAN News report, one of the soldiers allegedly involved was summoned for questioning on Tuesday and at the end of that session, he was placed under arrest. The daily Haaretz reported that 14 of the 17 soldiers involved were arrested. The incident in question reportedly took place last week, during Chol Hamoed Sukkos, when the soldiers returned from the 14-year-old’s levaya.

According to the soldiers’ version of what occurred, they stopped in the gas station and a group of Bedouins began to taunt and curse them, with one even stating, “come soldier and I’ll stab you!” Their NCO commander wanted to take that man into custody, and this led to a commotion. When the Bedouin tried to attack the NCO, the soldiers came to his side to protect him. A brawl developed. When they searched the pockets of the man who threatened the commander, they learned he was not carrying a knife.

At this point, the soldiers explain they left the gas station. On Tuesday, military police made arrests.

A father of one of the soldiers, Ron Tuval, told KAN Reshet Bet Radio correspondent Kalman Lipskind “They soldiers were returning from a levaya of a young man killed by lightning. They stopped to freshen up in the gas station at about 1:00AM. A group of Bedouins were sitting there, and an exchange of words began.

“At the end, they all returned to the minibus and one of the Bedouins began to shout and taunt them, including ‘come soldier and I’ll stab you in the heart’. My son, the [Non Commissioned Officer] commander of the force, approached him and arrested him. The Bedouin man tried to grab his gun.”

Attorney Itamar Ben-Givir is representing one of the soldiers. He released the following message to the media. “Once again, soldiers are being abandoned. The Commander did what was expected of him and protected himself and his soldiers. If he ran, it would be called negligence and lawlessness, but apparently, the IDF prefers dead soldiers rather than soldiers who perform their duties. It is a scandal. Only in Israel is it the default to arrest soldiers”, with Ben-Givir having extremely harsh words for military police.

The IDF Spokesman’s Office adds: “Israel Police received a complaint regarding violence involving a number of soldier and civilians. Police handed the case to military police, which launched a probe. It appears the soldiers veered from military regulation or the law and they will be dealt with in accordance to the fullest extent of the law”.