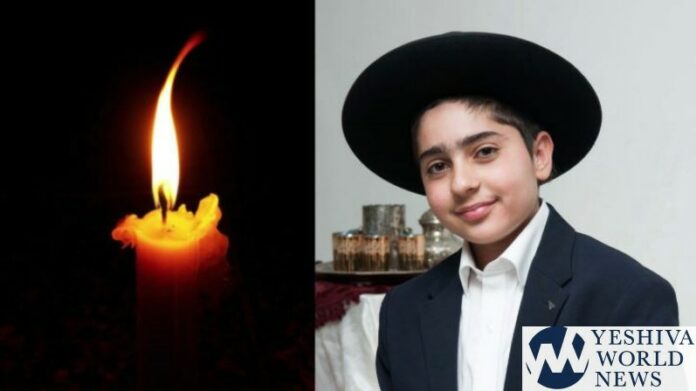 YWN regrets to inform you of the tragic Petira of 14-year-old Asher ben Mazel Hazut (חזות). Asher is one of five members of the Hazut family struck by lightning on Zikim Beach on Tuesday afternoon while on a family Sukkos outing. He had been in a pediatric intensive care unit in Ashkelon’s Barzilai Hospital in “very serious” condition, sedated and on a respirator. He was Niftar on Wednesday afternoon.

Asher, was the member of the chareidi family who was most seriously injured in the lightning strike on the beach. His brother-in-law remains in an intensive care unit, also intubated and sedated. His sister and brother were also injured in the event and B’chasdei Hashem, their conditions are improving, admitted to Barzilai in light condition.

Dr. Gili Givati, the deputy director of the hospital told the media that “five injured persons arrived at the hospital’s emergency room. Asher was the most seriously injured.”

“Another seriously injured victim remains in an adult intensive care unit and she too is intubated and sedated and receiving intensive medical care as well. Three others were injured, listed in light-to-serious condition, and are admitted and being treated in various units in the hospital”.

The family is calling on the tzibur to be mispallel for the family members:
• Efrat bas Sara
• Elchanan ben Mazel

The father explains, “I went with my wife and family to the abandoned beach near Zikim. At about 2:00PM in the afternoon, we were hit by a lightning bolt and fell to the ground. After a few minutes, medical teams arrived on the scene and we were taken to Barzilai Hospital in Ashkelon in a paramedic ambulance.