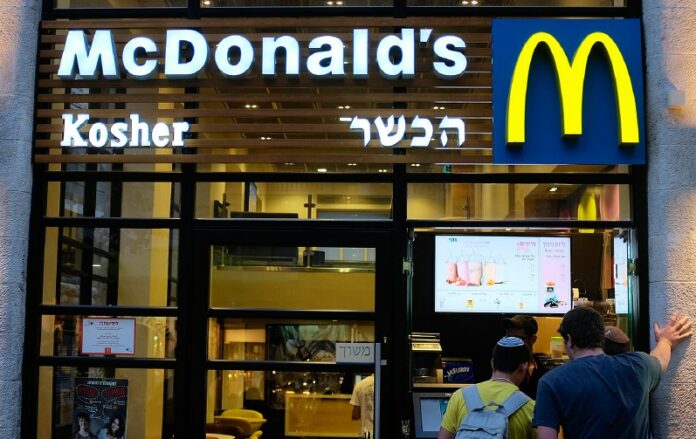 The McDonalds restaurant operating at Ben-Gurion International Airport opens on Shabbos but is certified kosher by the Chief Rabbinate of Israel.

The restaurant was awarded the license to operate in Ben-Gurion Airport’s food court. It is a kosher branch and requested to remain open on Shabbos to service the travelers coming and going on Shabbos.

Towards this end, McDonalds turned to the Zomet Institute towards learning if and how the branch may be operated on Shabbos without Chilul Shabbos. Zomet’s chief engineer, Yoni Ben David and his colleague, Daniel Shinsinsky, visited the branch at the airport.

Some of what was explained to branch managers includes:
• Removing door sensors for refrigerators used in the branch, including on Shabbos.
• Heating cabinets with hotplates in the shelves to maintain heat would be programed for Shabbos, to operate in continuously from the start to the end of Shabbos.
• Some devices would have to be covered and locked to cover the power switches to avoid turning them off and on during Shabbos.
• Food preparations would be done as in guesthouses; cooking on erev Shabbos and only reheating on Shabbos without changing the temperature.

There is currently one lawsuit against the Chief Rabbinate of Israel pending with the High Court of Justice, regarding hotels around Israel that operate on Shabbos and are certified kosher, some even mehadrin.

To date, the Jerusalem Rabbinate has rejected requests for certification, prompting the case with the High Court.