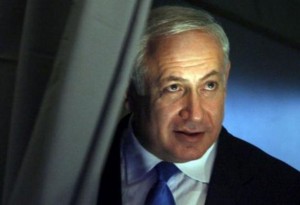 One year after the elections that almost ousted Prime Minister Benjamin Netanyahu from power, resulting in a disappointing showing by his Likud-Beytenu list, the two-party alliance is now seeing dramatic gains among likely voters, according to a new detailed poll conducted for The Times of Israel.

If elections were held today, Likud-Beytenu would gain additional 15 Knesset seats from its current 31 to 46, the Times of Israel poll, conducted by Steve miller – a reliable and pretty accurate poll – has found. In the 2009 elections, when they ran separately, the Likud party won 27 seats and Yisrael Beytenu 15, for a combined 42 seats; the new Times of Israel poll suggests support for the merged parties has returned to and even surpassed that 2009 level.

These surprising figures include undecided voters, who are distributed according to the ideology they expressed in follow-up questions, 202 Strategies pollster, Stephan Miller noted. Likud-Beitenu’s support among decided voters is even higher — at 46%, or 55 seats; it falls to 38%, or 46 seats, when undecideds are accounted for.

Some of Likud-Beitenu’s gains are due to the relative popularity of Prime Minister Netanyahu himself, the poll indicates. A majority of 52% of likely voters said there is no other viable alternative to Netanyahu as prime minister among the current class of Israeli politicians. Just 35% saw other alternatives out there.

The shift of support towards the ruling party, would cost Yair Lapid’s centrist Yesh Atid Party 6 seats (falling from 19 to 13) and the religious-nationalist Jewish Home Party, led by Naftali Bennett, 4 seats (12 to 8). Suggesting that self-identified right-wing voters are abandoning Yesh Atid in the center and Jewish Home on the right in favor of the ruling Knesset faction.

Likud-Beitenu now has the support of 50% of right-wing voters, compared to 39% in last year’s elections. The Jewish Home party’s share of right-wing voters dropped from 18% last year to just 6%, according to the pollster’s analysis. 20% remain undecided.
According to the poll, Shas and Meretz would remain steady at 11 and six, respectively, the Arab parties would lose 3 seats and United Torah Judaism and Livni’s Hatnua would each drop a seat, from seven to six and from six to five, respectively. Kadima would not pass the current two-percent vote threshold required to enter the Knesset.

Labor, under the leadership of newly elected chair, MK Yizchak Herzog, would return to second-place with 18 projected seats.

The bad news for the left, however, is that the Israeli electorate is now identified far more with the right than with the left. 42% of likely voters self-identify as right and just 21% as left – a 21-point gap, according to the poll. Just 23% continue to describe themselves as center.

A similar poll released on the first anniversary of Netanyahu’s 2nd consecutive term as Prime Minister showed a dramatic surge in support of the ruling party – Likud Beitenu. The surge would extend out of proportion if Likud and Yisrael Beytenu run separately, instead of as the merged list they ran in for the current Knesset.

If elections were herd today, the Likud Beitenu party would increase its strength from 31 in the current Knesset to 40 projected seats, according to a GeoCartography poll of 500 Israelis conducted for Radio 103 FM. However, if the two parties were to split, The Likud would garner support that matches up to 39 seats, while Yisrael Beytenu would get 16 seat – a combined number of 55 seats.

The jump of support towards Likud can be defined as a an indication that the Israeli public is moving to embrace Netanyahu who’s leaning towards accepting Sec. Kerry’s framework for a permanent peace deal with the Palestinians. On the contrary, it might indicate a shift of the Israeli public towards the right, after losing hope in Yair Lapid’s Yesh Atid Party.

Political analyst Jeremy Saltan told Arutz Sheva Wednesday that the poll shows that Israelis are shifting to the right.

“The ‘Right-Religious’ block received 72 seats in the 103 FM poll this morning. In a scenario poll where Likud and Yisrael Beytenu ran separately the block would increase from 72 to 76 seats. A Likud-Yisrael Beytenu-Bayit Yehudi coalition of 62 seats is possible, according to the scenario poll,” he noted.

“The clear loser of this trend is the “Center-Left” block, particularly Labor’s Yitzhak Herzog and Yesh Atid’s Yair Lapid, who both consider themselves candidates for prime minister,” he added.

As for the reason behind the sudden shift to the right:

“One possible analysis is that the nationalist politicians, particularly Likud’s Defense Minister Ya’alon, have responded very strongly against the American pressure on the diplomatic negotiations,” Saltan suggested. “In a Panels poll from last week Israeli voters were asked: ‘Do you think Secretary Kerry is operating in the right direction in regards to the diplomatic negotiations?’ 53% answered ‘the wrong direction,’ and only 27% answered that he was operating in the right direction.”