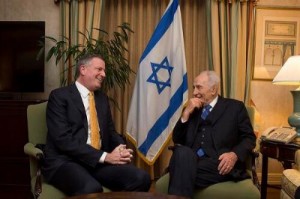 NYC mayor Bill de Blasio got Wednesday another opportunity to display on a national platform his strong support for Israel. In an interview on MSNBC this evening, mayor de Blasio was criticized by the host, a Liberal New Yorker, Chris Hayes, for a speech he gave last month to AIPAC. The host questioned the mayor as to why he proclaimed that defending the state of Israel is part of his job description as mayor of New York City.

“I want to ask you how you see your job. You gave a speech to AIPAC. The speech wasn’t on the public schedule, it was off the record, but the content was reported,” said Hayes. “One of the things that you said was it was part of your job description to be a defender of Israel… [Yes]… Obviously, we are not going to resolve the very complicated issues vis-à-vis Israel and Palestine. But I got to say as a New Yorker, I thought ‘I don’t know if that’s true. I voted for this guy, and I don’t know if it’s part of the job description for him to be a defender of Israel. It seems like he’s got enough on his plate. Is he the defender of the Ukrainians in the streets, who are crying out for their rights? Is he the defender of the Taiwanese against the one China policy?’

“Is it really your job, is that your job description?” Hayes asked.

But Mayor de Blasio didn’t take the bait. He once again explained why the mayor of New York City plays a major role is speaking out as a staunch supporter of Israel.

“Look, I said something that was personal. I said something that was about my belief that we have to defend the state of Israel,” mayor de Blasio responded. “And I think that has everything to do with the alliance that we have with Israel, the history have and particularly as New Yorkers, the deep, deep connection with have personally with Israel. I think it’s also a matter of protecting democracy. I think Israel’s stance as a pluralistic society deserves respect… It has been under attack and I think it is our job to support it.”

“So that’s me speaking as the mayor of a city that is the closest to Israel than any city on earth and that has one of the largest Jewish populations of any city on earth. And I think it is a fair role for me to play,” he added.