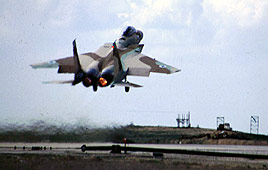 The day marked the beginning of the next phase of the military offensive, the ground forces incursion involving armored vehicles, tanks, the air force and navy. Tens of terrorists were eliminated in the first hours following the entry of foot soldiers into Gaza. The air force struck 40 terror targets, including Hamas regime buildings and mosques used to store weaponry.

Over 60 Katyusha rockets, Kassam rockets and mortar shells were fired into Israel on Shabbos and motzei Shabbos.

Israel is taking steps to prepare for a possible second front, the northern border. To date, four Israelis were killed and 330 injured.

Southern area residents in the 40km (24 mile) range from Gaza are instructed to remain in and near safe rooms. Residents on Sunday morning can be seen cautiously making their way to grocery stores to restock, with an emphasis on fresh bread, dairy products, canned goods and of course, bottled water.

IDF officials have commended residents on their endurance, telling them that while the operation is proceeding as planned, the coming days may be increasingly difficult. All schools in the 40km range remain closed today.

In somewhat of an ironic note, today, 4 January, marks the third anniversary of former Prime Minister Ariel Sharon slipping into a comatose state from which he has yet to recover. It was Sharon who masterminded the 2005 Disengagement Plan that resulted in the ousting of all Jews from Gaza, which many believe has laid the groundwork for Hamas to build itself into the formidable threat it has become.

IMPORTANT NOTE: YWN offers three different options (all free, of course) for keeping in touch with the news as it happens. Should you wish to receive breaking updates via SMS text message (in the USA), or two different email alert options, please click HERE to sign up – and join the already tens of thousands of subscribers.