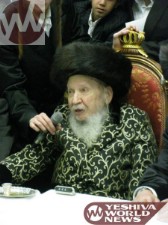 The two Gedolei Yisrael have released a kol korei to Am Yisrael to increase tefillos on behalf of IDF soldiers and the situation in Eretz Yisrael, stressing the achdus that exists and the potential the achdus can have towards ultimately bringing the geula. The two Gedolim presented the matter to Maran Rav Chaim Kanievsky Shlita, reporting he is pleased with the effort that has been undertaken.

Bringing sources from Yalkut Shimoni regarding tefillos of one for another, soldiers themselves or people acting on their behalf may submit names for tefillos.

One may phone 02-581-1911 or fax 08-945-0027 email [email protected]. The list is also intended for anyone whose is ‘stricken’ by the situation, perhaps people in shelters, in southern rocket-stricken areas or anyone impacted by the situation who feels he/she wishes others to be mispallel on his/her behalf.

Anyone wishing to daven for soldiers and those requesting tefillos is encouraged to use the contact information reported in the article to request the names of soldiers. “Noshim tzidkonious” are also encouraged to receive names to daven on behalf of those in need during this difficult time.