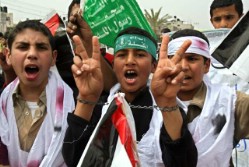 While details of the proposal have not yet been released, Arab sources being quoted by Ynet online are signaling Hamas is accepting the Egyptian ceasefire proposal.

The report adds that Hamas officials are still disputing a number of points, but are now willing in principle to accept the initiative.

In the meantime, in Israel there is a growing voice demanding that no ceasefire agreement of any kind be accepted without a provision addressing the release of Gilad Shalit.