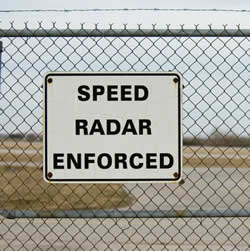 In what will undoubtedly comes as a bad tiding for many radar-detector capable motorists, Israel is stepping up to a newer advanced system that is already in use in Europe, a system that detects a vehicle’s speed without using radar technology, rendering radar detection devices useless.

The new system installs two strips across an intersection with a two-meter space between them, measuring the time it takes for a car to pass over the strips, calculating the vehicle speed, and if applicable, photographing the rear of the speeding car and sending the results to a police computer, enabling police to have the summons in the hands of the vehicle’s owner within 48 hours.

Police hope that in phase one, 50 of these state-of-the-art units will be installed nationwide, adding the cameras stationed alongside the underground strips are digital, 10 megapixels, enabling them to take many many more photos than the conventional cameras in use today.

In addition, they are self-protecting, and the computer will send police an alert as a vandal tries nearing the camera’s protective case, and will snap photos of anyone seeking to damage the device. The digital camera is capable of operating at a pace of two photos per second. Police believe the new unit will permit a significant increase in the number of speeding summonses issues, which stands at 200,000 for 2008.