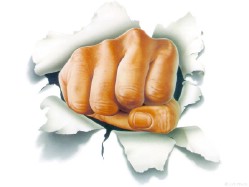 It would appear that the Three Weeks and the lessons that should be learned from the tragedies that have befallen Am Yisrael during this time period should remain in the forefront of our conscious state, but for some, even Avreichim, this is not always the case.

Security cameras have captured an attack against Rav Mordechai Asher, the Rav of the Chabad Shul in the Kiryat Yovel area of Yerushalayim. It appears for some, the conflict between the chareidim and the secularists is not enough, and on Sunday, four Avreichim decided they are compelled to act and they attacked the rav.

Rav Asher explains that he began his minyan in the community about 8 years ago, open to all, explaining that during the early years, the number of mispallalim was limited. The rav explains that over time, his efforts began to yield results more and more mispallalim would be seen making their way to the shul on Brazil Street.

He explained to Ladaat.net that about 2.5 years ago, a number of people decided to attempt to take over the shul, resulting in an ongoing legal action. The opponents he explained damaged locks and at one point, event chained doors closed to prevent anyone from davening in the shul.

He went on to explain that a beis din of rabbonim in the area suggested a compromise solution last week, but the solution is not acceptable to him and his followers. Others however decided to act, and security cameras captured them in the act, breaking into the shul on Friday, prompting the rav to file a complaint with police.

This apparently angered some, resulting in the attack on Sunday, during which four Avreichim dragged the rav into the shul, bound his hands, beat him and then rolled him down the stairs.

The rav was transported to a hospital for an exam. Unfortunately for the attackers, their actions were also captured on security cameras and two are already in custody.