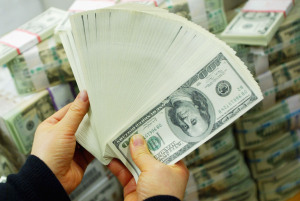 According to a Yediot Achronot report, “tens” of well-known rabbonim and Mekubalim along with “hundreds” of rabbonim, mohalim and mesadrei kedushin (rabbis performing weddings) are instructed to submit income tax returns.

Those targeted by tax authorities were given a two-month deadline to submit a comprehensive accounting of their income and assets in Israel and abroad within two months. They are instructed to go back seven years in their report. Yediot states that the IRS move is resulting in allegations of “persecution from the chareidi community.

The report quotes a “senior IRS official” who states NIS millions are earned annually and no one is paying tax as required by law.

At present, 40 requests were sent for a comprehensive accounting of the last seven years were sent to rabbonim and Mekubalim in addition to hundreds to mohalim, misadrei kedushin and others, who might perform a pidyon ha’ben or one of many other religious ceremonies.

Tax officials suspect in some cases, sizable donations made to mekubalim are deposited in their private accounts and the funds are not given to a yeshiva or institution.

Yehuda Nisardishai, who heads the Tax Authority, plans to build a framework for all the admorim, rabbonim and mekubalim in Eretz Yisrael to create a structured tax environment and eliminate today’s realities.

Authorities estimated the amount of money that has evaded tax authorities may be in the NIS hundreds of millions.

In some cases, tax agents visited mekubalim, requesting a bracha, after which they left a donation to verify there is no receipt or recording of the funds. Tax officials feel that in many cases, funds are not used officially to pay salaries, but rather to “assist the needy”, especially for shabbos. Officials explain this is no different than a factory giving an employee shopping vouchers to buy items instead of a salary to avoid tax on the salary.

Nisardishai stressed that many rabbonim checked are indeed in compliance with the law, and they record donations as required, seeking to dispel accusations that his authority is persecuting chareidim. He adds other sectors were recently targeted in special operations as well, including taxis in Tel Aviv and the food industry, explaining this is the tax authority’s method of apprehending tax evaders. He rejects any attempt to label his actions are directed against the chareidi community more so than any other sector of society is targeted by tax officials.

No mention was made in the article if similar steps are being taken against clergy of many other religions which maintain institutions in Eretz Yisrael.