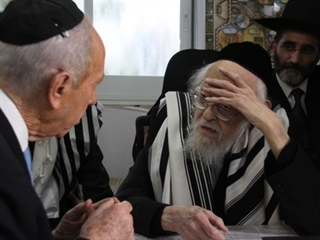 Needless to say, security in the area was extremely heavy. The president arrived prior to Maran finishing davening. The meeting lasted for about 20 minutes. HaRav Yosef Efrati was also present.

Rav Elyashiv called on the president to prevent Jews from visiting Har HaBayis, stating it is an act that that is viewed as extremely provocative by the goyim. Maran stated everything possible must be done to avoid a religious war, and the provocateurs are playing with fire.

Maran is quoted as explaining to the president that halacha forbids going onto Har HaBayis but today, it is more than this, it is an act that may lead to a religious war and bloodshed. 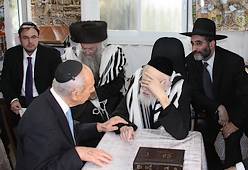 Mr. Peres stated at Mt. Sinai we recited Shema Yisrael and were are instructed to listen, calling on the gadol hador to make his voice heard. “You are regarded in high esteem by the public and must make your opinion heard” the president urged.

The Rav gave Peres a bracha, stating he has been a good shaliach for Am Yisrael, wishing him continued good health.