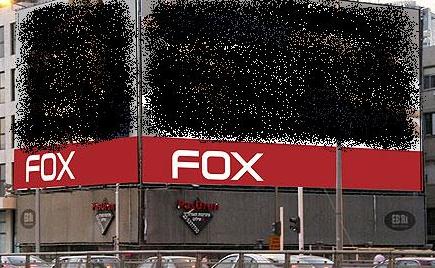 The Fox franchise has embarked on a NIS 250 million advertising campaign, one that is most offensive to those who value modesty, frum and non-frum alike. It has been about two years since the company’s offensive signs were removed from the billboards of Ayalon Highway, but on Wednesday, (October 21st), a 400 square meter billboard presented a major affront to those who value modesty and decency.

Rav Mordechai Blau of the Mishmeres HaKodesh announced Fox has stores in frum areas such as Bnei Brak, and many chareidim shop in one of the nationwide stores, including those in mixed areas, and the community does not plan to accept this new reality as a fait accompli. “Even companies advertising on buses have learned one must respect the community” and the truly offensive adverts have been eliminated.

Rav Blau explains “this is not a laughing matter” and the offensive adverts are unacceptable. He stated that thousands of chareidim will stop purchasing anything in Fox shops, unwilling to accept such an offensive reality in Eretz Yisrael. He explains that the unacceptable realities on the internet and other forums are no less offensive, but when they hit the streets, the frum community is left with no alternative and as a result, he is compelled to act to remove the abomination.