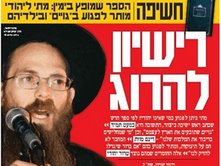 The publication of a sefer entitled Toras HaMelech (The King’s Torah) written by Rabbi Yitzchak Shapira, the rosh yeshiva of Ohd Yosef Chai Yeshiva in Yitzhar, has become an item in the news in Eretz Yisrael on Monday, with the book explaining one is permitted in accordance with halacha to kill goyim who threaten Eretz Yisrael.

The sefer enjoys approbations from HaGaon HaRav Dov Lior Shlita, Rabbi Yaakov Yosef, and Rabbi Yitzchak Ginsburgh. It is important to point out that while the media is having a field day with the sefer, it is written that the sefer discusses theoretic halachic principles, and in no way calls for the murder of goyim, “Arabs” or “Palestinians” as the media seeks to imply. The sefer goes as far as to state “one may not take the law into one’s hands” and that the sugyot discussed as strictly halachic interpretations for the sake of learning and understanding halacha and not chas v’sholom a license to kill, the words used for the bold daily Maariv headline (see photo).

The sefer adds that killing a non-Jew who has violated the Seven Mitzvos given to non-Jews because we care about torah and mitzvos, then this is acceptable. It stresses the importance of Eretz Yisrael, the halachic requirements of the land, and living within a torah framework, quoting passages from Tanach and the Rambam, citing sources for the halachic ruling.

Back in 1996, Rav Ido Elba published a 19-page kuntris on halachic guidelines regarding when one may kill a non-Jew, a publication that was also a halachic discourse, not a handbook for murder chas v’sholom. He was indicted for publishing the sefer and found guilty by the Jerusalem District Court. He appealed the conviction to the Supreme Court and lost. The court rejected the fact that the sefer deal with theoretic halachic matters, not an actual license for murdering goyim. He served a two-year jail term.

With Israel’s retreat from Shechem in 2001, the yeshiva which was established in 1982, located in the Kever Yosef complex was expelled, forced to relocate, setting up its new home in Yishuv Yitzhar. Rav Shapira, the rosh yeshiva, is a long-time resident of Yitzhar, a Chabad chossid, and a talmid of Rav Yitzchak Ginsburgh who is a known authority on kabala and runs the Gal Eini Institute.