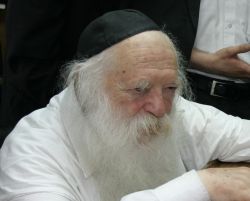 An avreich visited with Maran HaGaon HaRav Chaim Kanievsky last week seeking a bracha for success in an upcoming legal proceeding against him regarding his employment of Arab workers.

According to the Kikar.net report, when the Rav asked about the legal procedure, the avreich explained, receiving the response, “what do you want from me. You deserve the punishment”.

The avreich nevertheless tried to get a bracha for success, but he left without success.

In March 2008, Rav Kanievsky already called on Jews to stop hiring Arabs, stressing there are many Jews who are seeking parnasa as was reported HERE by YWN-Israel.