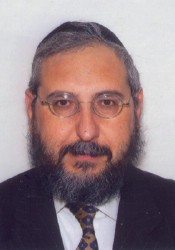 R’ Amsellem will be releasing his new sefer “Zera Yisrael” which addresses the halachos of giyur and the views of gedolei yisrael. The sefer reportedly addresses the conversions of over 300,000 immigrants from the Former Soviet Union, who are not viewed as Jews according to halacha. He feels they can undergo giyur as his sefer will show. The rav explains that much of his sefer addresses the rulings of the rabbonim regarding the need of giyurim to adhere to mitzvos, what mitzvos and to what extent, and if and when a giyur decision is reversed. Rabbi Amsellem stresses a giyur must accept mitzvos, but many rabbonim do not understand how far this is taken and when exception should or must be made.

The rav explains that the approach to bring potential giyurim closer is the proper approach for those who can trace Jewish roots, “Zera Yisrael”, explaining that halachically, regarding giyur; they are in a different category then regular non-Jews seeking to convert. Therefore he explains; the approach to such potential converts is drastically different from goyim who wish to become Jews.

He states one who openly announces he has no intentions of keeping mitzvos, he is not accepted. On the other hand, he explains halacha states explicitly that a convert who accepted mitzvos and changes his mind, remains a Jews and that cannot be reversed. (Rashbatz – 3:47)

Rav Amsellem quotes Maran Rav Elyashiv Shlita, who in the past addressed those wishing to undergo giyur and openly state they do not plan to be chareidi, but traditional, and there is room for this too as this is part of today’s life. “This is an area where the beis din must look into the eyes of a candidate” he explains, “and make a decision”.

The rav says his sefer makes reference to the giyurim who were converted via the IDF, providing a warm attitude and open arms towards them, explaining they are giving of themselves towards the defense of the nation and the Jewish people and the poskim of the past took this reality into account when dealing with their giyur as well.

“The State of Israel cannot permit itself to stagnate regarding the giyur matter, and the process cannot be frozen, warning a continuation of the current controversy will chas v’sholom lead to civil laws that will split the nation apart and/or lead to civil marriage. The retroactive cancellation of one’s Jewishness after he has lived as a Jew for years in not humane, and even worse, such decisions may lead to severe complications including mamzeirus.

The rav brings many pertinent matters to light, that Rishonim state one who lights shabbos candles and does not keep shabbos is not a ‘kofer’. He adds that statistically, over 80% of Israelis fast on Yom Kippur and light shabbos candles and in accordance with halacha, the beis din has a great deal of leeway as to bringing one into the fold, to become a convert, and these issues must come into play for “Zera Yisrael”, Jews who have traceable roots to yiddishkeit.

People close to the rav report that during the past months while he was completing the sefer he was under tremendous pressure, including threatening anonymous letters and telephone calls as well as pressure on rabbonim whose approbations appear in the sefer. The rav has been involved in the halachos of giyur for many years, and is known to have given many many shiurim on the subject.

Those supporting the rav explain that with great effort and siyata d’shmaiya he has endured, along with those rabbonim who support him and agree with his approach towards the halacha and giyur, with reports indicating some rabbonim who have reviewed the sefer state it is truly a rare find, probing halachos that have not been reviewed in a very long time, appearing in one bound volume, providing a comprehensive compilation addressing the entire giyur process and its complexities.

The word is that the sefer will without a doubt spark controversy among rabbonim, the Chief Rabbinate perhaps, and the entire matter regarding the different views pertaining to the giyur conducted by the state under the direction of HaRav Chaim Druckman Shlita, who as a result of the controversy was compelled to step down under the guise of his advanced age.