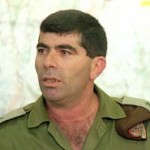 IDF Chief of Staff Lt.-General Gabi Ashkenazi’s flight to Brussels was delayed for a number of hours earlier this week for fear he might be arrested upon arrival in Europe. Ashkenazi was traveling to a NATO meeting of military chiefs.

Ashkenazi was scheduled to depart at 4:00pm on Monday, but the flight was canceled ‘for security reasons’ attributed to fears of an arrest warrant. Officials add there were also concerns regarding security arrangements for the military commander in the airport in Europe.

It was decided to abandon the original travel plans, with officials opting for a direct flight to Brussels, avoiding a European stopover.

It is now standard procedure that prior to Ashkenazi or other senior IDF officers traveling abroad, a probe for arrest warrants is made. Of late, the travel plans of a number of officers, holding the ranks of colonel and brigadier-general were canceled due to arrest warrants against them.