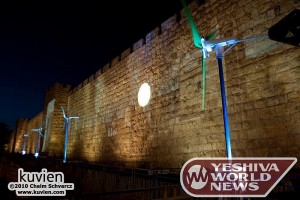 Jerusalem participated in Earth Day 2010 in part by killing the main lights in the Old City. Illuminated windmills were on site for the occasion as well as displays of recycled materials made by students., some of which received awards for their creations. The ceremony was marked with speeches by political dignitaries as well as a brief musical interlude accompanied by a light show.