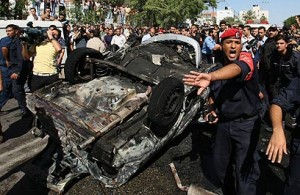 During a joint IDF-ISA operation today, November 3rd 2010, a senior leader belonging to the terror organization “Army of Islam” was targeted. During the targeted operation, the senior leader, Shati-resident Muhammad Namnam (born 1985), was killed.