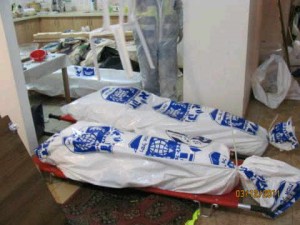 IDF troops were dispatched to Itamar only three hours after the terrorist infiltration into the West Bank community, despite an alert by the electronic fence surrounding the settlement.

In these critical hours, a terrorist or two were able to gain entry into a home in the community and stab five family members to death, including three children, the probe into the murder shows.

The settlement of Itamar is equipped with a comprehensive defense system and saw no terror attacks since 2002. The system includes various fences and observation means that alert a central operations room manned by two civilian security officers at any given time.

In addition, the community is guarded by six civilian security guards, in addition to IDF forces deployed just outside Itamar.

Friday night, an alert from the electronic fence was registered at the central operations room, prompting a patroller to head to the site. However, he did not identify signs of infiltration and decided he was dealing with a false alarm.

The security guard also failed to dispatch IDF troops who were stationed less than one kilometer away. The forces only rushed to the scene some three hours after the terrorist or terrorists entered the community. An electronic alert was apparently also registered after the attackers left Itamar following the murder.

The probe into the brutal murder in Itamar is in a very advanced stage and has concluded that two terrorists apparently entered the community. The investigation is being managed by the Shin Bet and IDF, without cooperating with Palestinian Authority security officials.

The probe, which got underway at 7 am Saturday, apparently bore fruit already. Some 20 people had been detained in connection with the attack.

Despite the close cooperation with the PA as of late, military officials decided not to join forces with the Palestinians in holding the probe, both because of the incident’s sensitivity and based on operational considerations.