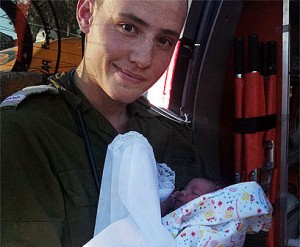 IDF forces and local paramedics helped save the life of a Palestinian woman and her newly born infant Wednesday, at the settlement where Fogel relatives are sitting Shiva for the five Israelis brutally murdered last week.

Just as IDF Chief of Staff Benny Gantz arrived in Neve Tzuf to offer his condolences, a Palestinian cab raced towards the community’s entrance. In it, soldiers and paramedics discovered a Palestinian woman in her 20s in advanced stages of labor and facing a life-threatening situation: The umbilical cord was wrapped around the young baby girl’s neck, endangering both her and her mother.

The quick action of settler paramedics and IDF troops deployed in the area saved the mother’s and baby’s life, prompting great excitement and emotions at the site where residents are still mourning the brutal death of five local family members.

Corporal Haim Levin, 19, an IDF paramedic, was the first medical team member at the scene and recounted the dramatic situation he faced.

“When I arrived, I saw a woman covered by a blanket in a yellow Palestinian van. I moved closer and saw the baby’s head and upper body,” he told Ynet. “The umbilical cord was around the baby’s neck; the baby was grey and didn’t move.”

“I first removed the cord from the neck and at the same time asked paramedics to prepare the baby resuscitation kit. I pinched her to see if she’s responding, and she started to cry,” he said. Paramedics also treated the mother, who was in good condition at that point, Levin said.