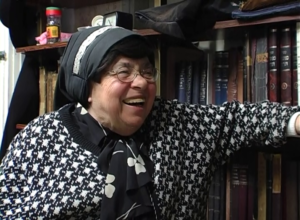 Rebbetzin Leah Koledetsky, husband of Rav Yitzchok Koledetsky and daughter of Rav Chaim shlit”a and Rebbetzin Batsheva a”h Kanievsky, has written a most heartfelt letter to the women and girls of Klal Yisroel, asking them to take part in the current global “Connecting to Greatness” campaign to assist Yeshiva Kiryas Melech, which is led by her brother, Rav Shlomo Kanievsky.

Rebbetzin Koledetsky writes, “I was greatly pained to hear that my brother, Harav Hagaon Rav Shlomo [Kanievsky] shlit”a, Rosh Yeshivas Tiferes Tzion and Kiryas Melech, is experiencing daunting challenges in sustaining his choshuve yeshivos, which are moser nefesh for their talmidim, educating them with great warmth and love, raising talmidei chachomim, who learn amidst simcha.”

The rebbetzin goes on to say that it is a mitzvah and a great zechus to assist these yeshivos in every way possible.

“My father, Rav [Chaim] Kanievsky, has taken this very much to heart, and has asked and pleaded for people to come to [Rav Shlomo’s] aid, assuring that he will be an emissary in the future on behalf of those who contribute [to this effort],” writes the rebbetzin.

Rebbetzin Koledetsky concludes with a brocha for all those who take part in this effort to “be blessed with good health, lengthy years, parnassah in abundance and honorably, shalom bayis, nachas from all your descendents, proper shidduchim quickly, holy children who are healthy and complete, wealth and happiness all your life.”

In the years since her mother’s passing, Rebbetzin Koledetsky has famously taken on her mother’s legacy of chesed. She receives hundreds of strangers a week, offering guidance and blessings to countless men, women, and children. With an open heart, she hears stories each and every day of those struggling with various challenges.

At this time, Rebbetzin Koledetsky, who has rarely asked others to assist in any endeavor, has reached out, asking for the members of Klal Yisroel to help her brother at this crucial juncture. 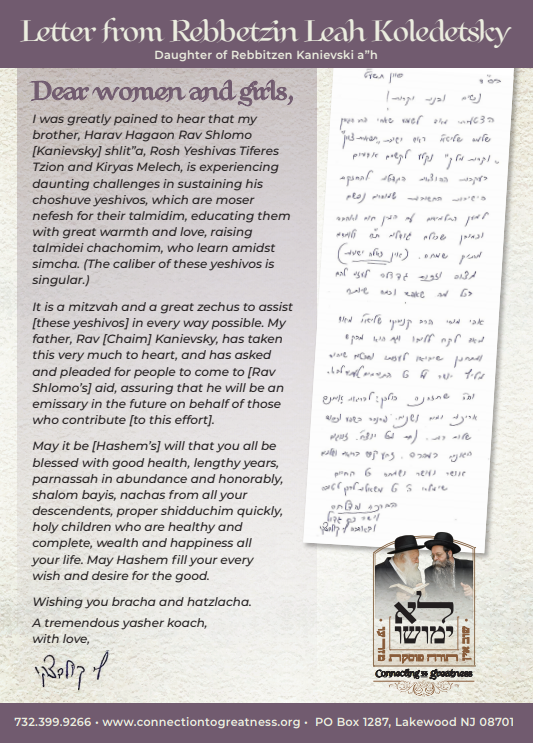