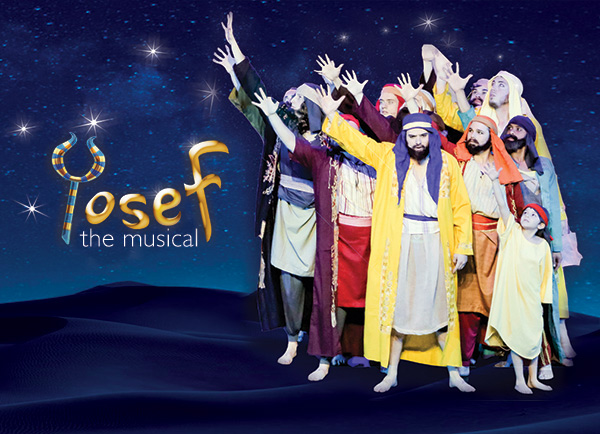 From the producer of Gad Elbaz comes the timeless biblical story of Yosef, a thrilling new production filled with unforgettable emotion, dance, comedy and the powerful message of unity. It’s an extraordinary theatrical event, now streaming in your home, where one favorite son will become your favorite too!

YOSEF features 20 original songs from the legendary Gad Elbaz and Zvika Bornstein with book & lyrics penned by Zvika Bornstein and Stuart Rappaport. Experience a cast of 30 professional adult and child actors on the stage and in the aisles, that will take you on a voyage back in time.

Journey with Yaakov, Yosef and his brothers on this extraordinary ride, as this colorful story comes to life. Yosef is favored by his father, rejected by his brothers, and then cast away. Its a story of a slave who became a master, a prisoner who became a king, and a king who became a legend. An ancient throwback, this energy-packed show will leave you laughing, crying and uplifted with the inspiring message of unity!

See why audiences and critics agree that Yosef will make your dreams come true!

*This all-male family musical is 100% Kosher, and is based on Torah and commentaries. Runtime is just over 2 hours.