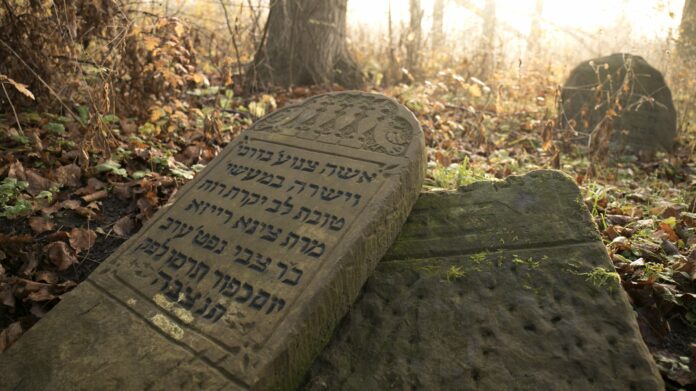 What about all the others?!

The city of Bila Tserkva is a typical Ukrainian city. Walking through it today you would never know that there was once a vibrant Jewish community living there. It had dozens of shuls and kehillos, and no less than eight Admorim who led their flocks there. In 1897 there were 18,720 Jewish residents (54% of the total population of the city); and in 1926 there were 15,624 (36.4% of the population). Even after the establishment of the Soviet regime in Ukraine in 1918, and despite pogroms that left around 300 Jews murdered, the Jewish community still thrived and took part in all aspects of communal life and municipal activities. Only after the Nazi SS death squads flooded the city and exterminated the city’s Jewish residents did Bila Tserkva’s Jewish community end.

The only remnant that remains as a silent witness to the vibrant and contented community that once existed there is the cemetery on the outskirts of the city. There are many hundreds of Jews buried in the old cemetery, among them great Chassidim and tzaddikim who lived two hundred years ago. But even the dead were not left in peace. The Communist authorities coveted the land and build a hospital over much of the area. Hundreds of graves were destroyed.

There was still a large portion of the cemetery that remains. For many years it stood desolate and dilapidated until the current municipal government decided to develop the land for a residential project.  The local Jewish community raised an outcry, but no one listened. Various organizations were asked to intervene to try and thwart the plan, but they met with complete failure. The contractor started digging the foundations, and it was horrifying to see the bones rolling around like trash in a most humiliating way.

Then Rav Yitzchak Schapira stepped in, and everything changed. This is how Rav Meir Holzberg, the Rav of Bila Tserkva, described what happened: “We were beyond despair. We had tried everything and didn’t manage to stop the terrible crime. We just gave up. Then Rav Schapira entered the picture. We saw that his approach was completely different. He had the ESJF – the international organization that he founded and leads – behind him. He dealt with the authorities respectfully while at the same time being firm and resolute. The organization used all the weapons at its disposal with quiet efficiency, eventually reaching the President of the country. Within a short time, the President’s staff did what had seemed impossible – the work stopped! To our great surprise, not only was the project scrapped, but they even made efforts to repair the damage, returning the bones to their places, allowing the deceased to return to their eternal rest.”

ESJF went to the root of the problem. This phenomenon, of cemeteries being viewed as abandoned property free for the taking, stems from one cause – years of neglect and the lack of fencing around the grounds. “When there is no fence”, the energetic CEO of ESJF Mr. Philip Carmel explains, “a cemetery becomes an abandoned lot. It invites hooligans, homeless people, wild animals, looters looking for building materials, and of course real estate sharks who are happy to turn it into a building site. When we get to a cemetery and fence it, all at once its status changes and is seen as a protected and venerated location. That is what we did in Bila Tserkva, and that is what we did in each of the hundreds of cemeteries that we fenced in across Europe.”

As surprising as it may sound, what stands between the destruction of the Jewish heritage in Europe and its preservation is simply a fence. However, the path that leads to putting up these fences is fraught with difficulties and requires money, a lot of money. Before anything else, the area needs to be mapped. This mapping is done by very advanced methods, the same kind of methods ESJF used in its giant project of surveying all the cemeteries in Central and Eastern Europe.

Many times, the ESJF team will come to the site and find only five headstones. Clearly there weren’t only five Jews buried there. The question then arises where the cemetery starts and where it ends. It is painstaking work to find out the exact area of a cemetery. In one cemetery there was only one wall left with a few headstones hanging from it. Besides for that there was nothing. The lot was full trees, bushes, and thorns. It was known that there had been a cemetery there but there was not even one grave to be seen. In some cases, the team arrives to find that the cemetery has become a garbage dump. In other instances, there are Christian cemeteries adjoining the old Jewish cemeteries, and when the neighboring graveyard ran out of room, they simply overtook the Jewish site, burying their dead there. One time the ESJF team came to inspect a site that had already been fenced in only to discover that someone had built a pigpen on the other side of the cemetery wall! If not for the fencing, the pigs would be wandering among the graves…

The actual fencing work, building walls and fences around cemeteries, is a major undertaking. The fencing encompasses enormous areas of land and runs to unbelievable amounts of running meters of sturdy fencing. Here are some examples of the lengths of fencing used in some of our recent projects:

All the work is done in coordination with the local government. The Israeli ambassadors in the various countries help mediate with the authorities and assist in solving particularly thorny problems. Take for example, the cemetery in Dubno in Ukraine, a city that had a Jewish population of around 12,000 before the Holocaust. When Rav Schapira came to check out the site, he discovered that half of the enormous cemetery – around 30,000 square meters – had been completely shorn of graves and had been turned into a market and central bus station. Some gravestones were being used as benches and others were used to build chicken coops. This is a case whose solution is still being worked on.

Cooperation with the Ukrainian authorities, where most of the work is currently being done, is quite good, but not always. “In the town of Anatevka, for example, we encountered difficulties”, Rav Schapira recounts. “They probably hoped that we would give up, and then they would be able to turn the graveyard into a high-class neighborhood.”

During his work in this field, Rav Schapira has seen many cemeteries in states of utter neglect – with garbage and empty alcohol bottes strewn about in some, and with wild animals wandering about in others. There were places where the gravestones were removed from large portions of the sites and the space was used for weekly farmers’ markets.

A former cemetery in Vilna in Lithuania is today a 4800 seat stadium; a nursery school was built over part of the cemetery in Zbarazh in Ukraine. Part of one cemetery in Belarus was so badly damaged that the contents of the graves were exposed. In another case, there weren’t enough burial plots for the non-Jewish residents of the town, so they just dug up the Jewish remains, removing them to some unknown location, and buried non-Jews in the graves in their place.

Hundreds of cemeteries have already been saved by ESJF’s thorough and dedicated work. There are around 10,000 cemeteries still in danger, waiting for us. ESJF, currently operating with funding from the German government and private donors, cannot do it alone. At the current rate of operations in a few years there will be nothing left to save, Heaven forbid. This responsibility is incumbent on the entire Jewish people; only by our combined efforts will we be able to achieve this vital mission and fulfill our obligation to our ancestors.

This year on International Holocaust Remembrance Day, we need to be reminded of the urgent help needed in order to save our Jewish Heritage! It is our collective obligation for the future generations.