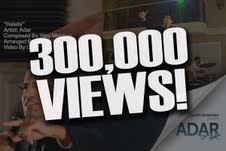 Rising artist, Amram Adar, released his debut album, “Baruch Hashem,” on December 11, 2011 to amazing reviews. Adar was picked up by veteran producer Yochi Briskman and together they’ve proved to be a strong force. Adar worked closely on his album with some of the biggest Jewish talent known today and “Baruch Hashem” reflects that star power. Adar’s upbeat music video, featuring the sensational song “Halaila,” was an instant hit with the public, garnering over 310,000 views (and counting).

Additionally, Adar is one of the most requested albums currently on YWN Radio.

“Baruch Hashem” is available on CD wherever great Jewish music is sold.

You can also enjoy Adar on YWN Radio, streaming 24 hours a day!