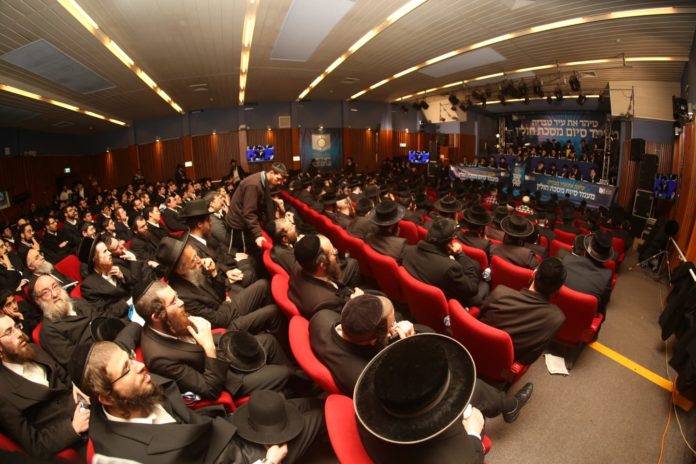 The city of Tiveriah has never seen such a powerful, overt demonstration of the importance of Torah. The crowd was massive, and it was clear that residents of Teveriah who care about Yiddishkeit were deeply moved. To see two octogenarian, leading Gedolim, the Ashkenazi Gaon, HaRav Baruch Mordechai Ezrachi, shlita, Rosh Yeshiva of Yeshiva Ateres Yisrael, and the Sefardi Gaon, HaRav Shimon Baadani, shlita, Rosh Yeshiva of Yeshiva Torah V’Chaim coupled with the Chassidishe Gedolim, the sons of the Sanz-Klausenberger Rebbe and the Stolin-Karliner Rebbe who all troubled themselves to travel to Tiveriah and give messages of chizuk to the city’s inhabitants was the greatest demonstration of achdus and kevod haTorah that the city has seen in a long time!

It is no secret that the Torah observant population of Teveriah is under siege. The recently elected mayor of Teveriah, Ron Kubi, is a rabidly anti-religious demagogue who has very effectively used social media in his frenzied battle against religion in Teveriah and against charedim in particular. He has made a conscious effort to trample on the kedushah of Shabbos in the city and has done everything in his power to thwart the growth of the city’s religious community.

Rav Gershon Edelstein of Ponovezh declared, “If Kubi is trying to retard the growth of Torah and denigrate its honor, then the response must be to increase Torah learning and k’vod haTorah in the city.”

It was in light of this advice that the hanhala of Dirshu decided to invest a tremendous amount of resources in Teveriah, promoting limud haTorah and accountability in learning.

At the siyum, Dirshu announced that they will open more than ten new Daf Yomi shiurim in Teveriah as well as Daf HaYomi B’Halacha shiurim. In addition, they will accept any new learners who want to join their programs and take the test without the usual prerequisites that are in place in other locales in Eretz Yisroel. They will also be giving classes for aspiring maggidei shiur to improve their delivery skills.

Perhaps Rav Baadani put it best when he said, “I am sure that in the merit of the additional Torah being learned here, he who battles Yiddishkeit, he who declares war on Shabbos will not succeed. I truly feel that Hashem sent the difficulties to this city in order to encourage us to strengthen ourselves.”