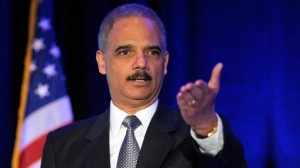 In a shocking new video, James O’Keefe’s Project Veritas demonstrates to the Attorney General of the United States, Eric Holder, just why he should be concerned about lack of voter ID laws – by walking into Holder’s voting precinct and showing the world that anyone can obtain Eric Holder’s ballot. Literally.

Project Veritas has already shown how dead people can vote in New Hampshire, prompting the state senate to pass a voter ID law; they’ve shown celebrities like Tim Tebow and Tom Brady registering to vote in Minnesota, prompting the state legislature to put voter ID on the ballot as a constitutional amendment. Washington DC voting law is a federal jurisdictional area. Will the federal government take up the challenge?